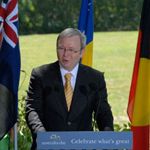 Speaking at a citizenship ceremony in Canberra, Prime Minister Kevin Rudd has flatly rejected calls by Australian of the Year Mick Dodson and several other Indigenous leaders to change the date of Australia Day.

After being named Australian of the Year on Sunday, Professor Mick Dodson called for a debate on whether Australia Day, which commemorates the landing of the first fleet at Sydney Cove on January 26, 1788, should be moved.

The Prime Minister said yesterday he had already apologised to Indigenous people for past mistreatment, and wanted to address Indigenous disadvantage instead.

“To our Indigenous leaders, and those who call for a change to our national day, let me say a simple, respectful but straightforward ‘no’.

“We are a free country and it is natural and right from time to time that there will be conversations about such important symbols for our nation.”

Mr Rudd said Australia had moved on from apologising for the mistakes of the past.

“But (it is) a nation now resolved to close the gap … in education, in health, and employment, and those things which matter in people’s daily and practical lives,” he said.

“I’m actually glad he’s joining the conversation,” he said. “I’m going to talk to Australians about a lot of things this year.”

Dodson later clarified his comments on ABC’s 7:30 Report saying that while a “substantial number of Australians” had a problem with Australia Day falling on January 26, he personally did not.

“I don’t have a strong view about this one way or another,” he said. “I don’t have a problem with the 26th of January, but some people do … and particularly the first Australians.

Prof Dodson’s comments have been welcomed by other Indigenous leaders around the country, including former Labor national president Warren Mundine.

“Yes, we do have an issue with the 26th January we can’t get away from,” Mr Mundine said.

“What we love at the Australia Day Council is that there is a discussion, there will be a debate,” said former Australian cricketer.

“That’s what we want to encourage. It’s getting people to think about what it is to be Australian in our great nation.”

Vote on the Australia Day issue in our online poll