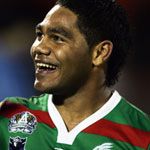 South Sydney halfback Chris Sandow has been awarded the inaugural George Green Medal as the NRL’s Indigenous Rising Star. Adding to the achievement, Sandow was also selected in the Indigenous squad to play at the Rugby League World Cup.

The Indigenous team who play New Zealand Maori as part of the Rugby League World Cup’s Opening Ceremony at the Sydney Football Stadium on October 26.

Named in the honour of the first Indigenous person to play Rugby League, the George Green Medal recognizes the best emerging Indigenous talent in the game.

Since making his debut in round 13 this season, 19-year-old Sandow has been a revelation for the Rabbitohs, helping them to seven wins from their past 12 games after an horrific start to the season.