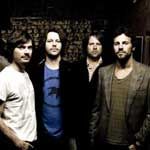 Kicking off National Reconciliation Week, Australia’s premier rock band Powderfinger today congratulated all Australian schools who have signed up for Reconciliation Action Plans (RAPs) and encouraged others to get on board. Visiting Lourdes Hill College in Brisbane, one of many Australian schools with a RAP, Powderfinger acknowledged the important role schools play in shaping better relationships between Indigenous and non-Indigenous people. “Reconciliation begins with the simple act of understanding one another so we can build respectful relationships for the future,” said lead singer Bernard Fanning. “Young people have the most to gain out of this, and schools can be the model example of how all Australians can work together and create benefits for everyone,” he said. Guitarist Ian Haug agreed: “The great thing about RAPs, is they’re more than just good intentions or words on paper, they’re concrete examples of things you can do in your daily or school life that can make a difference and help turn around Aboriginal and Torres Strait Islander disadvantage.” The RAP program, first launched by Reconciliation Australia in 2006, commits schools and other organisations to specific, measurable activities that build relationships, respect, and opportunities that support Indigenous people to succeed for the benefit of all Australians. Interesting and creative school RAPs will be recognised with a special visit from members of Powderfinger who have been promoting reconciliation since last year’s historic Across the Great Divide tour. Reconciliation Australia’s Chief Executive Barbara Livesey said schools have always played a leading role in reconciliation and nearly 400 schools have registered an interest in the action plans. “Schools now join RAP organisations across the country, including blue chip corporates, like Qantas, ANZ and BHP Billiton, sporting codes like the NRL and all levels of governments, in identifying actions and activities they can undertake towards closing the 17-year life expectancy gap between Indigenous and non-Indigenous children,” said Ms Livesey. “Most schools already participate in National Reconciliation Week each year, and by doing a RAP they can now play a part all year round. Ultimately we want thousands of schools RAPping for years to come,” she said. 27 May – 3 June marks National Reconciliation Week (NRW). The theme for 2008 is Reconciliation: it’s all our story. Following the national apology to the Stolen Generations in February, NRW this year is an ideal time to join the conversation and think about what we can do to advance better relationships between Indigenous and non-Indigenous Australians. For more details go to www.reconciliation.org.au