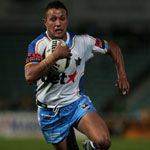 Scott Prince has produced what many are calling his greatest performance in the NRL, staring in the Titans 28 – 20 win over Parramatta last Friday night.

Enjoying the best start to a season in his 10 year career, Prince scored one try, set up two more and kicked four goals, prompting Titans coach John Cartwright to label him as the best half back in the world on current form.

Prince’s superb start to the season has now placed him on a representative collision course with incumbent Queensland and Australian halfback Jonathan Thurston, still recovering from off-season shoulder surgery.

After receiving three Origin call-ups in 2004, and two caps for Australia in 2005, Prince has been perennially snubbed by Queensland and Australian selectors despite being one of the most dominant players in the NRL. This has largely come down to the emergence of Thurston as the games best player – the fact both are Queenslanders squeezing Prince out of the Origin picture.

Despite calls for Prince to make a return to rep football being stronger than ever, the 28 year-old says he is not expecting any favours from selectors. To make the situation even more frustrating is the fact he would walk straight into a New South Wales line up at present had he been born south of the boarder.

After a rocky start to the year, Thurston has proven he will not be making things any easier for Prince to make a rep footy return, roaring back into best form and producing an equally impressive display against the Dragons over the weekend.

The North Queensland skipper produced his best performance of the season so far, tormenting the Dragons with his probing kicks, scoring one try and setting up another. The icing on the cake was his perfect four-from-four with the boot – bringing his tally up to 12 in a row and 44 from 46 since round 23 last year.

With the centenary test less than a month away, the performance may just be enough to prove to selectors he is now fully recovered from injury and ready to lead Australia once more.

With the availability of Darren Lockyer currently under a cloud due to injury problems, a possible solution would be to pair Prince with Thurston in the half’s, with one of them moving to five-eight. Greg Bird and Braith Anasta are currently the most likely to fill any vacancy left by Lockyer however.