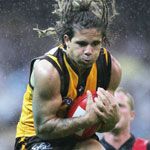 Chance Bateman has become the first Indigenous player to reach the 100 game milestone for Hawthorn after staring in the Hawks 44 point win over Adelaide on Sunday.

Now in his ninth year playing in the AFL, Chance marked the milestone in fine fashion, picking up 30 touches and kicking two goals as the Hawks surged toward their fourth consecutive win to start the season.

“It was probably one of my most enjoyable games,” said Bateman after the match.

“I was really happy with the way the day turned out, it was a pretty special day for myself.

“The way the boys played was unbelievable, to get the result and I was lucky enough to get a couple of goals as well, so I was pretty happy with the way things went,” he added.

Chance’s Indigenous team mate Lance Franklin also continued his outstanding start to the year by kicking six goals, while Mark Williams returning from injury added three of his own.

The high flying Hawks are currently sitting atop the AFL ladder.