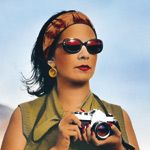 In the art world, Brisbane-born photographer Tracey Moffatt is an international superstar.
Nowadays, she calls New York home but she recently spent a few months back in her home town working and catching up with family and friends. She also travelled to Sydney to open a major retrospective of her work at the Museum of Contemporary Art.
Before the opening, Tracey found time to sit herself down on the floor of the MCA to have a chat with Deadly Vibe.

You grew up in Mt Gravatt in Brisbane. What was that like?

When you grow up in an oppressed society, it gives you such an edge – I always felt like growing up in Queensland was being in the deep South. So when I watched Tennessee Williams films or read Truman Capote, the larger-than-life characters in those stories reflected my upbringing. And the heat and the racism and the redneck attitudes, I felt, were very like the deep South. So when I’m in America, I meet people who say ‘There’s something really southern about you.’ They think I’m southern, not only to do with stuff like that but the way I am – the way I throw parties, the way I’m a hostess. I know how to serve a drink and make people feel at home. I think that’s quite southern and therefore quite Queensland. We were taught manners and we had to wait on the adults who would come to visit, with cups of tea and serving them. Also, as the eldest girl, you had to do all the work – help with the kids and help with the housework.
There were four Moffatt children and we were fostered into a larger family with five children, but they were older and had left home.
When you grow up with such a strict, old-fashioned upbringing, it leaves room for fantasy and make-believe. Those long, boring summer days, those endless Brisbane summers that would stretch on only fuelled imagination. I think kids these days are too stimulated. Entertainment is constantly provided. In a way I’m half-jealous but something in me isn’t envious at all. I think my boring upbringing led me towards art because you have to look for escape – you find it yourself or create it yourself.
So the early photograph I made for the show [at the MCA] called I Made a Camera is about childhood creativity. I pretended to be a photographer and made a camera out of a cardboard box. I remember it very clearly. I was eight. I think I was copying a Charlie Chaplin film I saw. It’s about childhood creativity. When you didn’t have something, you made it, and I like that. I think some kids still do that, don’t they?

What do you think of your home town these days?

Oh, it’s changed so much. It’s so groovy now. It’s very cafÃ© society. Oh my God – I don’t recall one place where you could get a cappuccino [when I grew up there]. I remember my first demonstration was a right to life march in 1977 and it was pure anarchy on the street. There were the Commonwealth Games in ’82 and I was involved in those demonstrations and there was just nothing more exciting. There’s nothing to protest any more, is there? Students don’t know the fun they’re missing out on.

What does your family say about your success?

I’ve always been the eccentric in the family and I always got teased about it and it used to upset me. But now, looking back, I have no regrets because I think that’s quite normal -when you are the weird artist in the family you’re always going to be teased. I guess it prepares you for later on in life – it prepares you for the bad reviews you’re going to get, which do come your way. So I am the eccentric but they’re very happy for my success.
My dear old mother, before she went and passed away, was just happy I was making a living. She wasn’t particularly into what I was doing, but as long as the rent was paid, she thought that was great.

I don’t know where home is any more. Brisbane is where I’m from; New York is my base. I think home is where you’re happy at the time and I don’t have great memories of growing up in redneck Brissie. You know, I don’t! I’m not nostalgic – part of me wants to forget it forever but you can work through things in your art. If you’re producing art, it’s better than seeing a therapist! And the fact that I live in New York, as far away from Brisbane as possible …. maybe there’s something in that. There’s something in that I don’t want to revisit the past, it’s too painful, a lot of it. I’m not sentimental, really, about my childhood although I’ve put an idealised version in that image I made, that ’50s, dreamy childlike scene with me and the camera. I guess we can romanticise things.

What is day-to-day life like for you in New York?

Oh, unbelievable. You never know what New York is going to throw up at you every day. It’s theatre on the street. I go out to do two chores and I come home exhausted. I have to have an afternoon nap, even if it’s just down to the post office. There are these mean bitches who work at the Chelsea Post Office – they’re always ticking me off about putting my elbows on the counter and things like that.
I have a lot of beautiful friends. I have Australian friends who are always coming to visit. I stay in touch with Australia big-time. But there are always the most amazing things going on. It’s so cultural – people from all over the world pass through or live there.
So it’s my adolescent fantasy about living amid the New York intelligentsia and being a part of that – it has come true. Living in New York is like being in a movie – you think you’re in a Martin Scorsese film every day. Living in Sydney is like living in Club Med, which isn’t a bad thing at all.

Do you have any advice for other artists?

I just can’t believe Australian artists moaning and whingeing – what is there to complain about? There’s no excuse. I say just get on with it. But what they need to do is show their work in other places. I wish they would. It’s not hard. I think Australians are shy and New Yorkers think New York is the centre of the universe, that nothing else exists. If you want to make it there, you’ve got to pretend that you live there. Australian artists should go there and meet art dealers and pretend that they’re around a lot, then come back six months later and say hello as if they’ve never left. New Yorkers can’t comprehend that you go somewhere else to live. Why would you want to live anywhere else but New York? Great art can be made anywhere, but by exhibiting in New York you’re getting a great platform and a huge audience.

How does your Aboriginal background influence your work?

It’s difficult to answer. I look at my work and I say, ‘What is Aboriginal about my work?’ I think of the great desert painters like Clifford Possum or Emily kngwarre and what do I have in common? I don’t know. I know all those great artists had a mischievous quality. The great Rover Thomas – he was funny. That may be one quality I have in my personality but in my art … I know it’s always baffled me and I wish I had the answer. But it would probably take a lifetime to think about and explore so I never have the answer to that. It’d be nice if someone could think about it for me! I would like to think that what I’m saying in my images – in film and photography – is that I’m trying to say something about the human condition generally.

Do you consider yourself a role model for other Aboriginal artists?

Of course! My work is studied in universities – in film departments, media studies, art theory – there are many areas that my work is studied in, and often Aboriginal students come up to me and say, ‘I wrote a paper on your work and I got a good grade’, and I love that! What I want to say to other Aboriginal artists is that I’d like to think they can go off and make art about anything. It doesn’t have to be about Aboriginal issues. I’d love some kid from the desert, from central Australia, to go off to Antarctica and make images of icebergs and say in a press statement, ‘Oh, I went there to explore form.’ That would be just the ultimate. I just think that’d be wild. That would blow my mind. ‘I’m exploring form’. Wow.