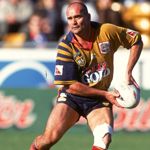 Indigenous rugby league legend Dale Shearer is fighting for his life in Brisbane’s Royal Hospital after being involved in a horrific car crash.

Shearer was returning to his Peregian Springs home on Saturday night after celebrating a friend’s birthday at a Noosaville restaurant.

The accident occurred around 11pm along the Sunshine mwy. Shearer was pulled unconscious from the car and given first aid until paramedics arrived. He was flown to the Royal Brisbane and Women’s Hospital with neck and internal injuries.

He had surgery and was in intensive care last night, listed as critical but stable.

Shearer played 20 Tests for Australia and was a Queensland State of Origin legend, playing 26 matches between 1985 and 1996 and scoring a record 12 tries for the Maroons.

Only a year ago, Shearer lost his wife Delyse to breast and liver cancer, leaving him to raise sons, Jesse, 17, and Jakson, 14.

Police said it appeared Shearer failed to take a roundabout and crashed into a culvert.