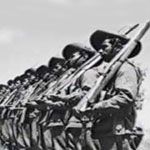 There were many important events, both in Australia and internationally, that contributed to the ultimate success of the 1967 Referendum.

Due to discriminatory interpretations of the Constitution, Aboriginal people were no longer permitted to register to vote.

1914-1918 ” the First World War
Although Aboriginal people were not legally recognised as Australian citizens, around 300 to 400 Aboriginal people signed up to the armed forces. White and black Australians fought side by side and friendships were formed, and this helped to break down many racial barriers and prejudices.

Unfortunately, when the war was over, the contribution of many Aboriginal war veterans to the war effort were not recognised. Returning Aboriginal soldiers found themselves once again facing racism and discrimination, as they once again became non-citizens.

1919 ” The Treaty of Versailles
Following World War I, the Treaty of Versailles was signed as part of peace negotiations with Germany. Part of this treaty was the establishment of the League of Nations ” an international peace-keeping body (now known as the United Nations), and the International Labour Organisation, which was set up to promote social justice and internationally recognized human and labour (working) rights. However, Indigenous Australians continued to be discriminated against in the workplace.

1920s ” Associations Formed
The Association for the Protection of Native Races, which was originally in 1913 but ceased to function in 1925, was reactivated in 1927 after a massacre in East Kimberly, WA, where a group of Aboriginal people were killed by police.

In 1928, the Association called for a Royal Commission on the Constitution, to give the Commonwealth control over Aboriginal affairs.

In 1924, the Australian Aboriginal Progressive Association (AAPA) was formed under the leadership of Aboriginal activist Fred Maynard. The aim of the AAPA was to raise awareness of the many struggles that Aboriginal people were facing. Sadly, the organisation folded in 1927, due to constant police harassment.

Aboriginal activists including Tom Peckham, Ted Taylor, Pearl Gibbs, Jack Patten and Bill Ferguson were active at this time, and were involved in strikes, stop-work meetings and protests around NSW.

1933 ” Petition to the King
William Cooper launched a petition to King George V, asking for Aboriginal representation in Federal Parliament. The Australian Government refused to forward the petition on.

1938 ” Day of Mourning
The APA and the AAL organised a National Day of Mourning and Protest in Sydney on January 26, 1938 ” the 150th anniversary of white settlement. Only Aboriginal people were invited to attend. A manifesto written by Jack Patten and William Ferguson, entitled Aborigines Claim Citizenship Rights, was read at the event, in which they appealed for a new Aboriginal policy, full citizenship status, equality and land rights.

Five days later, on January 31, William Ferguson and other APA members met with the Prime Minister of the time, Joseph Lyons. They presented him with a 10-point plan for achieving Aboriginal equality. Their proposals were ignored by the government.

1939-1945 ” The Second World War
Aboriginal people once again enlisted to fight for their country, as did Torres Strait Islanders. Once again, there was no recognition given to returning Indigenous soldiers or their families.

1949 ” More Voting Rights
The Commonwealth Electoral Act extended voting rights to Aboriginal and Torres Strait people who were members of the Defence Forces.

1956 ” The Melbourne Olympic Games
The Olympics brought international attention to Australia, and to Australia’s treatment of its Indigenous people.

1957 ” Two steps forward
White Australian activist Jessie Street campaigned for a referendum for including Aboriginal people on the national census. She circulated a petition, which was read in the House of Representatives on May 14, 1957.

1958 ” FCAATSI is formed
The Federal Council for the Advancement of Aborigines and Torres Strait Islanders was formed in 1958. FCAATSI worked with a number of other Indigenous and non-Indigenous organisations to campaign for a referendum on Aboriginal issues. A petition was circulated to be presented to Parliament.

1965 ” The Freedom Rides
Inspired by the civil rights movement of blacks in America, a group of Indigenous and non-Indigenous students led by Aboriginal activist Charles Perkins drove around to country towns in NSW to protest against segregation and the poor living and working conditions of Aboriginal people. The Freedom Rides, as they came to be called, brought national and international attention to Australia’s treatment of its Indigenous people, and force many towns to improve their treatment of Aboriginal people.

1966 ” Wave Hill Strike
The Gurindji people, who worked on Wave Hill cattle station in the Northern Territory, went on strike, demanding wages and a return of some of their traditional lands. Led by Gurindji man Vincent Lingiari, they set up their own camp on their traditional lands at Wattie Creek. Their demands were initially refused, by the Gurindji remained on their lands and support for their campaign began to grow. Eventually the Gurindji won title to part of their land.

Sir Harold Holt also succeeded Sir Robert Menzies as Prime Minister. As Prime Minister of Australia he signed the United Nations International Accord for the Elimination of All Forms of Racial Discrimination. This meant that he was required to abolish the White Australia policy.

1967 ” The Referendum
With the mounting public support and pressure for a referendum, Prime Minister Holt finally gave in, and called a referendum in 1967. An overwhelming 90.7 per cent of Australians voted yes to change the Constitution to allow the Commonwealth to make laws for Aborigines and to include them in the census.