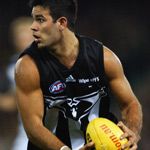 Collingwood’s Richard Cole is a young star on the rise. As well as making a strong contribution to his team, making the play-offs, he was among nominations for 2003’s Rising Star Award.

Coming from the Pioneers Club in Alice Springs, Cole was discovered while being schooled in the National AFL Pathway Program. He represented the Northern Territory in various junior national age championships and, after being spotted, became a member of the AIS/AFL Academy in 1999 before being selected in the U/18 All Australian team in 2000.

Cole was picked up by Collingwood at the end of 2001 as its first pick in the draft and immediately signed a two-year contract. He is hoping to re-sign at the completion of this year’s finals series.

Playing as a half-back flanker, ‘Coley’ as he is known to his team mates, is progressing well. In 2002 he played nine games and kicked his first goal, describing it as something special. “I still remember it,” he says. “I got a handball from Nathan Buckley, turned and snapped over my shoulder and it went through. It felt unbelievable.”

This year, Cole played 14 games and kicked five goals and he is happy with the way his game is developing. “This season has been satisfying for me,” he says. “I’ve played more games and kicked more goals. I was a bit overweight last year, putting on about 10kg, but this year I’m fitter and it has shown in my game.”

The classy young left-footer established himself as a regular first team member this season and was nominated for the National AFL Rising Star Award after judges noticed his effort in round 17 against Carlton, when he collected 10 kicks, took eight marks, made three tackles and kicked one through the posts.

A few weeks ago, judges gave the honour of 2003 Rising Star to Hawthorn midfielder Sam Mitchell.

However, Cole has his eyes on a bigger prize. The Pies finished second in the regular season this year, and going into the play-offs Cole thinks his team has got good momentum. “We are definitely capable of winning the flag,” he says. “We’re playing well at the moment and although the play-offs are a higher level of competition, I think we’ve got the team and the experience to go all the way.”

As for next season, Cole says: “My first priority is signing a new contract and then playing all 22 games. I also want to increase my fitness level and play a few more positions and become more versatile.

“I’ve already achieved one goal and that is playing in a final series. That’s what this game is all about – finals footy.”