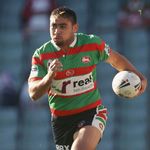 An Alexandria Rovers junior, Merritt made his debut for the Rabbitohs in 2002. After a brief stint with the Sharks he returned to Redfern and in 2006 became the NRL’s leading try-scorer. He now joins fellow Rabbitohs stars Roy Asotasi, David Fa’alogo, John Sutton and Craig Wing as players contracted with the Club until the end of 2011.

“In previous years, South Sydney has struggled to keep its juniors but now we see the likes of Nathan Merritt and John Sutton committing to the Club for extended periods of time,” said Rabbitohs Director of Football Operations, Shane Richardson.

“Nathan is the type of player we feel can become a leader at the Club. He is a South Sydney junior, he understands what it means to pull on the red and green jersey and the honour that goes with that. He knows it takes hard work and commitment to reach the heights he has and we know there is better to come from him,” he added.

Merritt also stated that he is pleased with the long-term contract.

“Souths is my junior club and I’ve always wanted to play in the red and green,” Merritt said.
“We had a bit of success last year but I think we can achieve more. It all starts next week against the Roosters and I’m getting ready to make my return to footy in that game.
“It’s exciting to know I’m going to be a part of this Club for at least the next four years and hopefully for a few more years after that.

“It’s a big season for the Club, especially being the Centenary year, and it’s great to be part of it.”