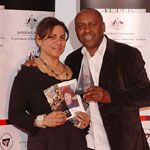 Into the History Books

Three Deadly winners take us on a walk through Indigenous Fitzroy.

Taking out the honours for Achievement in Literature at this year’s Deadlys was The Dirty Mile, a History of Indigenous Fitzroy, a collaborative effort penned by Kylie Belling, John Harding and Gary Foley.

While some in the audience may have never heard of The Dirty Mile, Kylie and John quickly gave them all a crash course in the history of one of Melbourne’s most fascinating suburbs as they accepte d t heir award.

“The Dirty Mile was a walking trail through the streets of Fitzroy,” Kylie explained.

“Gertrude Street or “˜Dirty Gertie’ as it is lovingly referre d t o, runs down Fitzroy and holds many sites of significance for Fitzroy’s Aboriginal people.”

The concept for The Dirty Mile came from Lisa Bellear, who passed away earlier this year, an d t o whom both Lisa and John dedicate d t heir Deadly. The play covers the history of the area from Invasion right up to the present day.

“We ha d t o interview a lot of community members and elders, an d t his is their award too,” said John.

“It was their stories that became The Dirty Mile; their grandparents’ stories, their mums and dads, aunties and uncles ” so this is really the story of Fitzroy an d t his award is really theirs.”

Fittingly, while Gary Foley was unable to attend he entrusted John to pass on a special message.