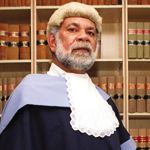 Aboriginal Australia mourns the loss of a true leader

Last month saw the tragic passing of the first and only Aboriginal judge. Judge Bob Bellear passed away on Tuesday, March 15 after a long battle with cancer.

Bob was a Noonucal/Bundjalung man from Murwillumbah, on the NSW north coast. He grew up surrounded by poverty and was forced to leave school at a young age to support his large family. But many years later, after witnessing one too many instances of racism towards Aboriginal Australians, he went back to school ” going on to university where he qualified as a barrister before being appointed Australia’s first Aboriginal judge in 1996.

Bob spent his life fighting for our people, and his dedication to social justice never faltered. He was also a mentor to many young Aboriginal and Torres Strait Islander people, encouraging and supporting them in the pursuit of a career in law.

An immensely respected community member, a trailblazer and role model, and a tireless advocate of Aboriginal Australia, Bob will be sorely missed by all.

To honour his memory, his family are establishing the Judge Bob Bellear Diabetes Clinic in Redfern, NSW. A State funeral was also held in his honour.