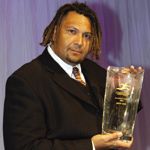 Looking for a sport with a difference? Why not try Gridiron?

What with the all-encompassing popularity of the Big Five ” AFL, NRL, rugby union, soccer and cricket ” most of us probably wouldn’t even spare a thought for American football, also known as Gridiron. So you may be surprised to know that there is a small, but flourishing, Gridiron community in Australia.

“There are currently 80 Gridiron teams across Australia,” says John Roe, former Australian Gridiron quarterback and head coach. “This has been building over the past 16 or 17 years.”

But why would anyone want to play American football? Surely all that padding just gets in the way?

“I’ve heard it all before,” says John. “That we’re a bunch of girls because we wear helmets and padding.

“But the thing is, when you’re wearing all that protective gear, you don’t need to worry so much about yourself. In Aussie Rules and rugby, you can only really use your shoulders to charge or tackle. But with padding, not only do you have more of a body to hit, you can charge with more of your body.”

The other main difference between Gridiron and a game like Aussie Rules is that players have to catch the ball while running forward, rather than being able to stop and face the direction in which the ball is coming.

John first got into Gridiron around 16 years ago, when he went to watch a demonstration game at Canberra’s Bruce Stadium.

“Two American college teams were playing, and I really enjoyed watching,” John recalls. “Then they made an announcement that a Canberra team was starting up, so me and a mate of mine joined.”

It took him several years of hard practice, but John eventually went on to play for Canberra, NSW and Australia. When he retired from playing, he started coaching state and national teams, leading the Australian team to fifth place at the 1999 Gridiron World Cup in Italy.

“That was an amazing achievement, considering how good some other countries are, and how much support their players and teams receive,” says John. “Our problem is, we can hit hard because of our rugby upbringing, but we lack the kind of speed that other countries have.”

John admits that there are very few Indigenous players currently involved in Gridiron, partly because most teams are based in capital cities rather than regional or rural areas.

“Our mob has the speed for it, but you need the size too,” John says. “The smallest guy in the Australian squad at the moment is six foot two and weighs 110 kilograms. The biggest guy is six foot six and weights 145 kilograms, and that’s nothing compared to world standards.”

In 2003 John was awarded Coach of the Year at the National Aboriginal and Torres Strait Islander Sports Awards. He now works as a supervising producer on SBS’s Living Black program, and is the Secretary of the Australia Gridiron Coaches Association.

If you’re interested in finding our more about Gridiron in Australia, check out their website at www.gridironaustralia.org.au. Here you can find out all about the game, as well as ways to get involved at the junior level, including a modified version of Gridiron that doesn’t involve tackling.