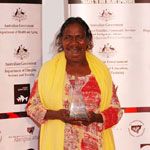 Our Visual Artist of the Year respects the past, celebrates the present and dreams for the future.

Perhaps it’s a first. For a few short minutes the entire Concert Hall of the Sydney Opera House was so silent, you could have heard the proverbial pin drop.

When Gulumbu Yunupingu took to the stage to accept her Deadly Award for Visual Artist of the Year, she turned to face the audience with a quiet determination; a self-possession and poise that caused all to stop and listen in awe.

Gulumbu was one of eight Indigenous artists to have their work selected for permanent exhibition at the Musee du Quai Branly , an international Indigenous art gallery that opened in Paris, France, this year. She had flown down to the Deadlys during a family ceremony, which waited for her return before concluding on the Sunday.

Gulumbu spoke of her pride in receiving her award, but she also spoke of a far deeper pride ” that of her father and the knowledge and skill he passed down to her.

As she carefully chose her words, Gulumbu’s voice shook at times with emotion.

“My father has passed,” she said. “But that was the past. Tonight, with this award, is the present.

“That is why I want to dedicate this award to my grandchildren. They are the future.”

She held her trophy high. The applause was deafening.