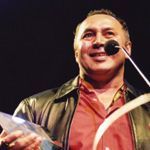 Gordon Hookey takes home the Deadly for Visual Artist of the Year.

One of the many areas in which Indigenous Australians excel is in the visual arts. Aboriginal artworks now fetch huge sums in art auctions, and our artists’ works are exhibited in prestigious galleries across the world.

The one who Indigenous Australia thought was the best on Deadlys night was Gordon Hookey, who won the Deadly for Visual Artist of the Year. A proudly politically artist, Gordon believes that his art making is located at the interface where Aboriginal and non-Aboriginal cultures converge.

Gordon was not initially planning on attending the ceremony, as he was struggling to make ends meet financially and couldn’t afford to make the trip. But Deadlys organiser and Executive Producer Gavin Jones made sure that Gordon would be there to accept his prize, paying the artist’s airfare and accommodation.

A clearly overwhelmed Gordon spoke of his admiration of the many other Indigenous artists from across Australia.

“There are at least fifty artists out there who deserve to be standing up here tonight,” he said as he held the award in his hands.

“When you’re an artist you spend so much time in isolation; it’s incredible to be here tonight, with all of you, to have my work acknowledged in this way.”

Gordon works across a range of mediums, and is currently exploring the idea of how global events affect the individual Australian.