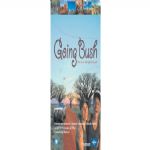 Cathy and Deb head for the outback in a journey of discovery that changes them both forever.

It’s a big country, Australia. This wide, brown land contains some of the most beautiful and diverse landscapes, flora and fauna in the world. Equally as varied are its people, with many Aboriginal communities still following cultural practices and traditions that hark back tens of thousands of years.

Sadly, because of the remote location of many of these communities, most Australians never get the opportunity to experience the quintessential Indigenous outback experience.

But a new Lonely Planet television special is aiming to change all that. Going Bush features two of our most beloved sistas, Cathy Freeman and Deb Mailman, who embark on a road trip of a lifetime to discover a side of Australia they had never seen before.

These two self-confessed city girls travel across the Top End, from Broome to Arnhem Land, checking out successful small-scale Aboriginal tourism ventures and meeting some truly amazing people along the way.

“It was such an amazing experience,” Cathy says. “It’s so exciting to be able to share it with everyone.”

The two friends jumped at the chance to take part in the program.

“When Lonely Planet approached us with the idea, there was no hesitation on our part,” Deb says. “It seemed like such a worthwhile thing to do.”

The series begins with Cathy and Deb leaving their homes behind and hitting the road. Negotiating the roads through some of the roughest and most remote parts of the country can take quite a lot of skill and, as Deb doesn’t drive, it was up to Cathy to steer their 4WD through the rocky dirt tracks and deep sand.

“Cath was an absolute expert,” Deb says. “She handled the road so well. In fact, the only time we had any problems was when someone else was driving ” once we blew about four tyres in an hour!”

Heading into Bardi country, the girls arrive at One Arm Point on the north-eastern tip of the Dampier Peninsula to meet up with Rosanna, an old friend of Deb’s. She takes the two mud-crabbing at a nearby mangrove swamp.

“These crabs are huge,” Cathy says. “I mean, we’re talking six or seven kilos here. Those claws could probably do some serious damage!”

“It was a really great experience to get out there and hunt your own food,” says Deb, who manages to get over her fear of the crabs’ huge claws long enough to wave them for the camera. “It’s wonderful to know that people are still living this way.”

Following an impromptu Bush Olympics with the locals and a shot at boomerang throwing, Deb and Cathy get the chance to savour more traditional fare, including dugong and turtle.

“Turtle fat is green,” Deb says with a grimace. “I didn’t dare try any, but I think it’s a bit of a delicacy for the mob up there.”

Cathy was brave enough to experiment, describing the experience as “slippery”.

Next stop on their journey was Derby, which is located on a peninsula jutting into King Sound. Arriving at the local radio station for what they believe is to be a simple interview, Cathy and Deb suddenly find themselves being set up for a blind double date. Prospective suitors were required to donate money to the Books in Homes program, and Deb and Cathy each chose a date from a host of eager callers.

“We actually ended up having a really great time,” Deb says of her and Cathy’s dates. “We spent a lovely evening together at a table set up on the mud flats, and were served a magnificent seafood feast as the sun went down.”

Despite the prospect of new love in Derby, the girls were soon on their way again, this time to Bunaba country in the heart of the Kimberley. They were met by a Bunaba elder, who welcomed the girls to country with a traditional smoking ceremony before taking them to see the Wandjina in the Windjana Gorge National Park.

The Wandjina are the ancestor spirits who have left their shadows on the wall of a cave in the form of rock paintings. They are tens of thousands of years old.

“It was so incredible to see,” Deb says of the Wandjina. “Imagine it. Forty thousand years of history right there. It was a pretty special feeling.”

The cave also contained more recent drawings done by Bunaba ancestors that depict the arrival of white Europeans on boats. These paintings were obviously done to serve as a warning for others.

“I was quite in awe,” says Cathy. “Speechless in fact. But I also felt incredibly humbled ” just a small part of a great big picture.”

Later in the day, Cathy and Deb accompanied Bunaba elders as they entered their traditional lands in Geikie Gorge for the first time in over 40 years.

“They had been locked out of there,” Deb says. “We had no idea that we would be present to witness such a special homecoming.”

The girls went for a swim in the waterhole after introducing themselves to the water spirits by taking a pebble and placing under their arm before tossing it into the water. They were then treated to a corroboree by the locals.

“Being in the bush like this was something that I’d been craving for a long time,” Cathy says. “It did my soul wonders.”

Deb agrees: “It’s like medicine for the soul, being out there,” she says.

After visiting traditional lands and viewing ancient rock paintings, Cathy and Deb are in for a change of pace, as their next stop lands them in the middle of rodeo country ” Halls Creek.

Both of the girls’ fathers were stockmen, and so it was a thrill to immerse themselves in outback station life, starting out by mustering a herd of steers.

“My father did one of the biggest cattle musters in history,” Deb says proudly. “They took over 10,000 cattle from Queensland to New South Wales. He used to ride bulls in the rodeo too.”

Cathy had a run-in with a bull before trying her luck on a home-made bucking bronco ” a barrel suspended by a single piece of rope.

“They wouldn’t let me try the real thing,” Cathy says. “But the barrel ride was hard enough.”

When it came time to leave the community, Deb found herself quite overcome with emotion.

“I grew up with cattle and horses, and the rodeo in Mount Isa,” she says. “I felt at home in Halls Creek.”

From cowboy country it was straight into crocodile land ” Wyndham and the remote community of Oombulgurri. Here they faced the nerve-wracking challenge of swimming in croc-infested waters.

Before entering the water, a local elder performs a smoking ceremony as a Welcome to Country and to let any lurking crocs know that the girls have been accepted onto the land and are therefore not to be eaten.

“I wasn’t as scared as you might think,” says Cathy, who bravely splashed out into the depths. “They had performed a ceremony to protect us, and that made me feel really special.”

Deb also braved the cool waters, keeping a wary eye out for any crocs.

“But as much as there was a part of me that was freaking out, I really did feel safe with those fellas,” she admits.

The girls also payed a visit to Wyndham Crocodile Farm where they met “Oombi”, a giant croc who is notorious for eating at least 26 of the locals’ dogs. There was also the chance to hold a baby croc, who melted both their hearts with its cute squeaky noises.

“What was so bizarre was that this baby crocodile had such a sense of fragility about it,” says Deb. “But then you just think about what it’s going to grow into.”

The last stop on this 4000-kilometre-long journey of discovery was Arnhem Land, the largest Aboriginal reserve in the country. The girls hook up with Indigenous rock band Narbalek, and help them to record a few tracks, with Deb on vocals and Cathy on keyboards, before discovering an isolated community that has found economic success with traditional weaving.

It’s here, in the community of Marparu, that Cathy and Deb’s expedition reaches a powerful and moving climax. The two accompany female elders to experience the ultimate bush sauna ” an exclusive female-only ritual that involves lying on a bed of burning nuts that are covered by grass and leaves before being covered over by paper bark and left to steam out all the dust, grime and aching muscles.

Taking part in this soothing ancient ceremony helps both Deb and Cathy draw greater strength from their roots.

“It is the land that you value, you come from the land,” a Marparu elder tells them as she prepares a tearful Deb for her sauna. “Think about where you have been. Don’t deny who you are. You are a strong Aboriginal woman.”

Both Cathy and Deb feel deeply and profoundly changed from their experience going bush. More than just a chance to learn more about their culture, their journey gave them a deeper sense of identity and of community.

“When I came home, I thought it would all feel like a dream,” Cathy says of the trip. “But it wasn’t a dream ” it was a life-changing experience. I don’t think my life will ever be the same again.

“I’ve always felt a certain tranquillity and peace from knowing who I am and where I come from, but what we went through has magnified this. My life has been enriched.”

Deb also feels that her life has altered.

“I just don’t seem as stressed as I used to be,” she says. “The peace that I felt up there hasn’t gone away. I think it’s the happiest and the calmest that I’ve ever been ” the closest to who I really am.

“It’s in me now. It probably always has been, but it’s like these extra layers have been stripped away.

“It made me deeply, incredibly proud to be an Aboriginal woman.”

Going Bush premieres on SBS on Wednesday, February 1. The Lonely Planet book Going Bush ” Adventures Across Indigenous Australia is also available, and contains a more in-depth look at the culture, sights, sounds and tastes of Aboriginal communities across Australia. RRP $34.95.