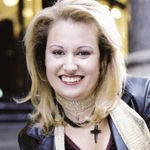 Home is where the heart is

There can’t be much space left on Larissa Behrendt’s mantelpiece. Alongside her countless degrees, including a doctorate from Harvard Law School, and a David Unaipon award, Larissa now needs to find room for her latest prize – a Deadly for Outstanding Achievement in Literature.

Larissa won the award for her novel Home. It tells the story of the effect that government removal policies had on three generations of one Indigenous family. It follows the lives of these stolen children as they struggle to find their place in a white world that they know is not their own.

Although Larissa has published several books on Indigenous rights, Home is her first novel.

“Writing Home was a wonderful experience for me,” Larissa told the audience as she accepted her award. “To write a story about the Stolen Generations and have it published meant an enormous amount.

“I’d like to acknowledge all those people who have laid the foundation for this new growth in Indigenous literature. They certainly paved the way for Indigenous people like me to tell my story. I’d like to thank them for their pioneering in this really important area.”

Larissa also thanked the Deadlys for recognising the importance of Indigenous literature (this year was the first time a literature category was included in the Deadlys), as well as her family and her “other family” – her colleagues from Jumbunna Indigenous House of Learning at the University of Technology, Sydney.

“When I look back at all the wonderful moments in my life, this acknowledgement will be one of the greatest,” she said.

At 35 she’s accomplished more than most of us could in a lifetime, yet for Larissa Behrendt it’s only the beginning.

Some people are born achievers, and Dr Larissa Behrendt is one of them. With more degrees than you could shake a stick at, including a doctorate from Harvard Law School, Larissa has worked as a practising lawyer in the areas of Aboriginal land claims and family law, as well as teaching at the University of New South Wales and Australian National University Law Schools.

“I guess I’m just a really motivated person,” says Larissa, who is obviously also the master of understatement. “And I find this kind of work really stimulating. I love my job. I love the people I work with. And I’ve got no kids, so that certainly helps!”

Larissa currently holds a position as Professor of Law and Indigenous Studies at the University of Technology, Sydney (UTS), and is also the director of the Jumbunna Indigenous House of Learning – a service that provides a range of academic and cultural support to Aboriginal and Torres Strait Islander students studying at UTS.

“Twelve years ago, we had two Indigenous students at this university,” she says. “Now we have 360. It really heartens me to see the number of Indigenous people in tertiary education.

“When you look at them, you can see a real generation shift. People are now realising their potential, and seeing that opportunities are open to them.”

Larissa has also published three books, including a novel, and is working on a fourth.

“Whatever my success, there’s still hard yards to be done,” she says. “Aboriginal communities are strong on valuing your commitment and your contribution, not just your degrees.

“I don’t feel as though I’ve earned my stripes yet.”

EMPLOYMENT
2001- University of Technology, Sydney
Professor of Law and Indigenous Studies and Director of Jumbunna Indigenous
House of Learning

GRANTS
“¢ Australian Research Council/DETYA Grant for a project titled The Protection of Indigenous Rights in Australia and Canada: A Comparative Study””, 2000-2001 ($14,500)
“”¢ ARC Large Grants: With the Public Law Centre (UNSW) and the Australian Institute of Aboriginal and Torres Strait Islander Studies, a grant for “Public Law Implications of a Treaty””. ($304 083)
“”¢ ARC Large Grants: With Ann Curthoys (ANU), a grant for “Use of Historians as Expert Witnesses in Federal Court cases”” ($188 240)
“”¢ Linkages Grants: With the Aboriginal and Torres Strait Islander Commission and the Koori Centre, University of Melbourne, “A Treaty between Our Nations”” ($302 941)