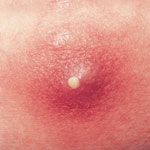 Most of us will develop a boil at some stage ” those unsightly and often painful sores on the skin.

A boil is a localised infection deep in the skin that usually starts as a reddened, tender area that over time becomes firm and hard. Eventually, the centre of the boil fills up with pus, which is a combination of the body’s own infection-fighting white blood cells, bacteria and protein. Eventually, the pus forms what is referred to as “a head”, and at this point the pus can be drained through the surface of the skin, lanced or surgically opened.

So just why do people get boils in the first place? There are several reasons. Some boils can be caused by an ingrown hair. Others can form as the result of a splinter or other foreign material that has become lodged in the skin. Others types of boils, such as cystic acne, are caused by plugged sweat glands that become infected.

A boil is caused by the bacterium Staphylococcus aureus, which inhabits the skin. Many people carry this bacterium in their noses, and it can cause a range of infections. The most susceptible areas of the body are the face, the throat, armpits, the groin and buttocks.

Other factors which can lead to boils include diabetes, poor hygiene, nutrition and broken skin.

While a boil will usually heal by itself, severe or recurring cases can require medical treatment. Any person who develops a boil who has diabetes or another illness which affects the body’s immune system should seek medical attention immediately. Boils around the eyes and nose should always be treated by a doctor, as there is a risk of the infection accessing the bloodstream and reaching the brain. Medical treatment of boils can include antibiotics and lancing.

There are a number of methods that can be used to treat and prevent different types of boils. If you develop a boil, DON’T SQUEEZE IT, as this may only spread the infection. Instead, wash the boil with antiseptic soap and apply a hot compress for 10 minutes or so, three times daily, to encourage the boil to come to a head. Keep the boil covered with a bandaid and wash your hands thoroughly. Always use fresh towels when treating the affected area and consult a doctor if the boil doesn’t improve after a few days.