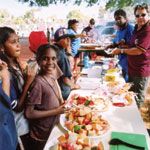 The results are in ” our health still lags behind.

The Australian Bureau of Statistics (ABS) has released the results of its 2004-05 National Aboriginal and Torres Strait Islander Health Survey. This survey is the largest ever study of the Indigenous population, and reveals that health problems in our own community still far outweigh those in the non-Indigenous population.

The most commonly reported health problem was eye and eyesight conditions, with 30 per cent of respondents reporting eye problems. This was followed by asthma, at 15 per cent. The survey revealed that Indigenous Australians were 1.6 times more likely to report asthma as a long-term health condition than non-Indigenous Australians.

High blood pressure was also widespread, with 22 per cent of respondents over the age of 35 reporting blood pressure problems ” that’s one in five people.

The survey also highlighted the continuing high incidence of diabetes, revealing that Indigenous Australians were more than three times as likely as non-Indigenous Australians to report having diabetes. Further to this, Indigenous people living in remote areas were almost twice as likely to have diabetes as those living in non-remote areas. And nearly one third of those aged 55 or over had diabetes or high blood sugar levels.

Overall, about two-thirds of respondents reported having at least one long-term health problem, with that figure rising to 80 per cent among people 55 years old and older.