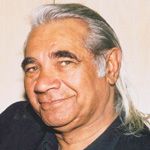 Every Mcleod Has A Silver Lining

After rescuing himself, Bobby McLeod set about rescuing culture – in song, rhyme and dance. Deadly Vibe meets a man for whom the sun is finally shining.

Do you think that this planet is prone to abuse?
And that ignorance about is an ideal excuse
Can’t you see all the sceptics are forecasting hell
The oceans are rising so what does this tell.

Monaro/Yuin man Bobby McLeod has been described as many things throughout his 54 years, some of them best not printed here. These days most people simply refer to him as an unsung hero of Aboriginal music. The fact is, though, he’s probably sung more than most!

Bobby released his first album, Culture Up Front, in 1988, followed by Spirit Mother in 1993. And thanks to a recent Australia Council fellowship, he has a third album out titled Paradox. But while intending to sell as many as he could, Bobby ended up giving many copies away. Why? Because he wants his music to be heard by those people who may not be able to afford it. “That way I have purpose as a song man,” he says.

Many of the songs on Paradox reflect a generosity of spirit as they detail the journey of Bobby’s complex life and the respect he has for the land. But in between the poignant and the peaceful, there are words of caution. One song, “Cannibalism”, characterises western-style capitalism as an order that consumes itself while making a lot of enemies along the way.

“I have been on a long journey of self discovery,” says Bobby. “My first album was about sorrow, the sickness of alcohol and the welfare mentality. With my second album, I was halfway through the healing process and learning a lot. Now with Paradox, I’m talking about self-control and destiny.”

In addition to music and poetry, Bobby is passionate about lore, dance and continuing the traditions that were denied to him as a youngster. Thanks to the assimilation policies of the time, Bobby’s immediate family was moved from their homelands in southern New South Wales to a mission known as Green Valley in Sydney’s west. At the time there were only two black families in the suburb, so they stuck together.

“I was always told I wasn’t good enough,” he reflects. “Kids in the playground thought we were dirty and they wouldn’t even hold our hands, just our little finger.”

Bobby began working for the water board. At night he would take to the stage, entering talent quests up and down the coast. He quite readily admits that he didn’t have his own sense of style then. Instead, he would just copy the famous singers of the day like Kris Kristofferson.

Bobby spent many years lost with alcohol. “By the time I’d turned 36, I’d been drunk every day for seven years.” With his health dangerously affected, Bobby realised it was time to turn his life around.

Going bush to learn about all aspects of culture, lore and spirituality enabled Bobby to pull himself back from a spiralling descent. “Learning lore is about the family, not the individual,” he says. Up until then, the alcohol had fuelled his anger, a terrible anger that left him suspicious of all non-Indigenous people.

During the 1970s Bobby McLeod had a reputation as a hard-living man and was regarded as a radical. He was passionately involved in such early struggles as the Aboriginal Tent Embassy, the political push for changes to legislation and the establishment of legal organisations for Aboriginal people.

He also travelled extensively during this time. In fact, it was on a trip to Canada that he saw young Indian men and women gathering for powwow celebrations. Through their Sundance laws, young Indigenous people were beginning to connect with their ancient culture rather than feel intimidated by the ceremonies of their ancestors. Culture was becoming something to celebrate and be proud of rather than belittled, avoided or denied.

Bobby hoped that by rediscovering culture, young Aboriginal men and women would develop a sense of pride and learn to value and respect ancient traditions. It was the memory of his experiences in Canada that led him to set up the Doonooch Aboriginal Healing and Cultural Centre in 1990 at Wreck Bay, southern New South Wales.

The initial aim of this self-funded organisation was to address the inordinately high levels of violence found in Aboriginal communities. ATSIC stepped in three years later with funding. But after having taken so many of the local youth through the program and improved their approach to life, Bobby realised there was still no employment for them in the area. So the Doonooch Dancers was born.

“When I started to teach the kids it was pretty heavy stuff,” he says. “It took about nine months, but in the end I respected them because they gave respect to their family and to the mother, our creation. Doonooch is my family – my sons, my nephews. If they don’t respect the culture and muck up, then we drop them from the group.”

‘Doonooch’ refers to the owl Dreaming and members of this dance company perform traditional dances both in Australia and overseas. Starting out as 10 year olds, in some cases, these dancers are now seasoned professionals.
Their most prestigious gig so far has probably been the opening ceremony of the Sydney 2000 Olympic Games. The group is entirely self-funded and were it not for the commitment and determination of Bobby McLeod, they probably wouldn’t still be in existence.

Bobby’s most burning desire is to see young people choose not to take that lonely and desperate path towards drug and alcohol abuse. As a father of nine and grandfather of 14, he has a found a new balance in life. And he loves dancing out in the bush with his sons, an initiation that is much more important than going to the footy and drinking beer. “Once you know culture,” he says, “you know you’re always protected.”

Although Bobby is a calm and gentle man, the passion and fire still burns within. Nowadays, however, it’s better directed through his poetry and songs. Speaking of which, keep an eye out for a book of his poems and children’s stories due for release next January, and check out the record bar for Bobby’s Paradox album.