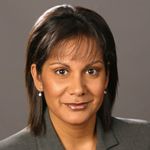 Stand up and be counted

Barbara joined the ABC in Darwin as a cadet journalist in 1989 and her career has taken her to newsrooms in Sydney and Canberra, where she has worked as a reporter and presenter.

She was the acting series producer of the ABC program Blackout and in 1998 she made a return to Darwin to work with ABC Radio news, before becoming the presenter of the Northern Territory 7pm news and Stateline in 1999.

Barbara’s decision to pursue a media career came from a very special place.

“Growing up with all the negative stereotypes towards Indigenous people definitely influenced me to become a journalist,” explains Barbara.

“The opportunity to meet people from all different walks of life and be able to hear the stories they have to tell was also another major reason.”

In her 16 years in journalism, Barbara has met countless interesting people and shared their stories. But of course, as with most journalists, there are always some stories that resonate more than others.

“There are two major stories that really had an impact on me,” admits Barbara.

“One was when I covered the Royal Commission into Black Deaths in Custody.

“Another one was a more recent story I did about the removal of people from their families at Phillip Creek [near Tennant Creek].”

Being a strong, community-minded person, one of Barbara’s great achievements came in 1997 when she returned to her community of Borroloola to establish the Gulf region’s first community radio station and the Lijakarda Arts, Culture and Media Training Centre.

Over her career, Barbara has seen many changes in regard to Indigenous representation and depiction in mainstream media.

“I think there is a real change going on at the moment in Aboriginal affairs,” says Barbara.

“With the demise of ATSIC we are seeing the beginning of a new era, where a lot of responsibility will come back on the communities and on individual people to stand up and be counted, to make a difference for their families and their people.”

In many ways, Barbara’s words reflect her achievements. She certainly has made a difference by standing up and succeeding within an industry that for so long has only reinforced negative images and opinions of Indigenous Australians.

“People in the public eye really put themselves up for criticism, and when you get the racial comments on top of everything else it can be very hard,” she says. “It’s just a matter of sticking at it and persevering.”

Barbara views the media as one of the most valuable ways to interact with people, and for that reason alone she would like to see more Indigenous people follow her into journalism.

“I would encourage young Indigenous people to get involved and have a go at anything they choose to do,” she says.

“The media is not easy. It’s is a very hard industry to survive in and the most important thing is to believe in yourself. If you do that, you will be OK.”