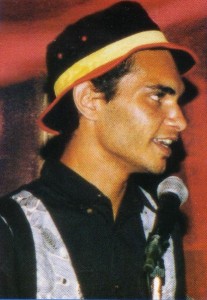 Where are you from? Maningrida, North East Arnhemn Land N.T.

What is your band called? Wild Water

How did you get into music? I was inspired by my brothers from Letterstick Band

What is the worst outfit you have ever worn? A silk shirt ‘cos when I got off stage my shirt was soaking wet.

If you could travel anywhere in the world where would you go? United States of America

What would you be doing if you weren’t a musician? Building mud bricks in Maningrida

Which part of your body would you most like to change? My teeth

Do you have a pet? A cat named Pebbles

Do you have a partner? I have a wife and two children.  A girl Philamena and a boy Telvyn Paul

What’s the best meal you can cook? Mashed potato, steak and gravy

What’s your favourite movie? Planet of the Apes

What is your worst habit? Grinding my teeth

What has been your greatest achievement? Winning Deadly Sounds Most Promising New Talent in 1996, Reconciliation Award (1997) and my children

Where do you get your hair cut? A Barber Shop in Darwin

When you were a kid, what did you want to be when you grew up? A taxi driver

If you could have one wish, what would it be? To live in a peaceful world

Do you have a nickname? What is it? My brother Colin calls me Salty, so I will have to say it is my nickname.

How would your best friend describe you? “I really don’t know how to describe Paul but I’ve been on the stage with him and I think he is very talented from his tradition and non tradition. So that is how I see Paul, and quiet too.”

Have you ever been in love? Yea!

Which element do you identify with most? Fire, water, earth or air? I identity with the water ‘cos I’m a saltwater man.