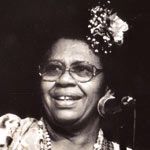 For many the Island music of the Mills Sisters, brings a flood of memories from the 1970’s. Those melodic harmonies, sounds of sunshine and strums from guitars of all sizes says TSI.

Now at 64 years of age Rita Mills from the Mills Sisters is going solo and is still singing to crowds of devoted and loyal fans especially with the release of her latest album Blue Mountain.

And it still is. Rita and her career are again flowering. Rita has just released a new album Blue Mountain and is currently jet setting around the USA, Canada, UK and Europe with a group of Torres Strait Islander singers, dancers, storytellers, crafts people and artists.

Her new album Blue Mountain is a collection of traditional songs from 12 of the Torres Strait as well as a few other special surprises.

“People will find out how special Blue Mountain is when they listen,” Rita laughs.

Her song Blue Mountain is about a place called Blue Mountain a mountain that looks understandably blue in the early morning when the sun rays hit it.

Rita’s cousin is featured on the album and sings Silent People, a track intended as a message to encourage Indigenous people to rise and forget about the problems of the past, take control of the future.

It took Rita quite a while to receive permission to sing the traditional Island songs. Indigenous musicians often face such issues when singing songs that are as old as over 100,000 years.

If we had a place for the grand woman of Indigenous music in this country, it would certainly be a special place, especially for Rita Mils. In her time, with the other Mills Sisters, Ina and Cessa, they have enchanted, entertained and educated thousands of people all over the world about Indigenous issues, culture and heritage.

If you want to get a copy of Rita’s new album, it is available now in the Deadly Sounds Record Bar. Or tune into Deadly Sounds to hear her tracks regularly.

When Deadly Vibe spoke to Rita, she was just packing her bags for her international tour. Rita says that she doesn’t believe she has changed much at all over the years. She says keeping a youthful attitude, keeping busy, sharing culture, talents and time with others, as well as singing about life keeps her young.

“Yes I’ve travelled the world and raised six children of my own and many others who I still love with all my heart and now I have 14 grandchildren. I’ve been a diabetic for over 20 years and I had a pacemaker put into my heart 5 years ago, but that’s no big deal,” Rita says.

Rita everyone at Deadly Vibe can’t wait to hear you sing your songs at home again soon.