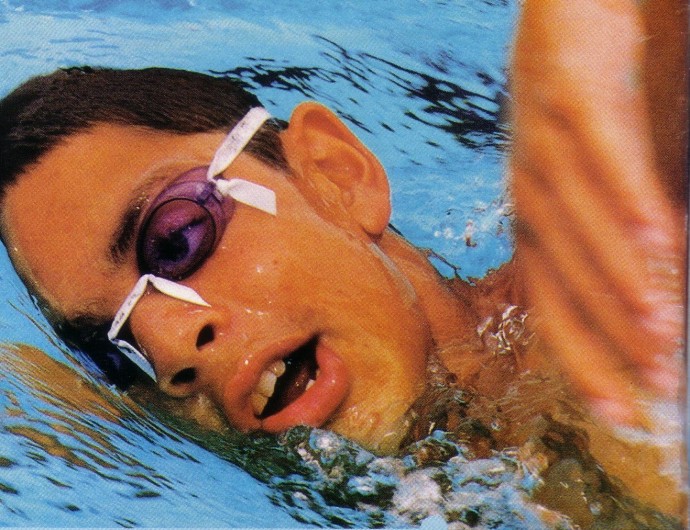 Well, actually it is every stroke, swimming Championships with six gold medals earlier in April. Everyone is talking about this aqua boy from Rockhampton.

Ashley fought off a virus on the first day, so didn’t start with his usual form but finished totally strong. Ashley won gold in the 100m butterfly, 200m freestyle, 50m freestyle, 200m backstroke, 100m backstroke and the 200m individual medley. He also was a member of the gold medal 4x 50m Queensland freestyle team. He was just two tenths of a second off the Australian record in the 100m backstroke and broke the Australian record for 200m individual medley by six tenths of a second. The record he broke was previously held by World Champion, Ian Thorpe.

This competition is recognised to be one of the biggest and toughest age group meets in the WORLD with more than one thousand competitors and several thousand spectators packed into the Adelaide Aquatic Centre.

Ashley is a remarkable swimmer. His talent was developed to it’s potential with the love and support of his mother Liz as well as his dedicated coach and mentor Otto Sonnleitner who knows great talent when he sees it.

Everyone agrees that Ashley has all of the qualities to take him to the top in the sport.

Besides his outstanding swimming ability, he keeps a level head and a mature approach at all times.

“There is no need to get a big head about it,” says Ashley to his mum after his record breaking swim at the nationals.

Ashley also has a remarkable story related to how he got into swimming. Deadly Vibe heard that apparently Ashley was spotted swimming in a local dam and encouraged to get proper training.

From there he became a member of the Central Queensland Aqua Jets Swimming Club at the South Rockhampton Memorial Pool and Coached by Otto and his daughter Margo, where he has been training for six years. The rest is history, or it soon well be.

“He is of average height for his age but has a great power to weight ratio and an incredible feel for the water which gives him an advantage in his swimming over the rest of his competitors when racing” Otto says.

Ashley has been making waves in swimming arenas for quite a while. He has jus trecntly6 been made a member of the National Tip Top Elite Development Squad, selected after his great State Championship results in September and January.

Last September at the Queensland short-course last year Ashley won al ten events he entered in his age group and broke the ten Queensland records. He then won another three gold in the State Championships in January including a record swim in the 200m individual medley.

At the Pan Pacific School Games in 1996 Ashley won the e200m individual medley, 100m backstroke, 100m butterfly, 100m freestyle and the 50m freestyle events competing against South Africa, New Zealand, Fiji and Japan. No wonder he was favourite at the nationals.

And Developing with Age

Ashley will probably be too young to compete at Sydney 2000 games; putting the men against the boys. He does however have his sights set on the commonwealth Games in 2002 so watch out.

Ashley will develop as he grows as will his stroke technique. He looks like being a great 200m and 400m individual medley swimmer as he has exceptional talent in all four swimming strokes.

We are sure that Ashley has a lot more records to break and medals to collect before 2002. Everyone at Deadly Vibe will be following your progress up until then and beyond.

Congratulations Ashley from the bottoms of our hearts.