When you hear the story of how Jodie Cockatoo Creed came to sing with Yothu Yindi, you realise that there is such a thing as fate.

Jodie, had grown up singing. Her father and auntie have strong voices and she followed in their footsteps, singing in a school band. When she left school, she was encouraged by her friends and family to keep on with her 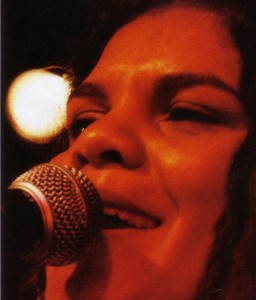 “I met a cousin from Darwin, and she told me I really should do something with my singing. She introduced me to this woman, Eleanor Boyd, who’d just come down to Cairns from Darwin. She knew this guy, Alan James (manager of Yothu Yindi). And just one week after I’d met her, she had a call from him asking her if she knew any Aboriginal female singers. So that was how I came to be in Yothu Yindi. I’d seen them three times before I joined them – but I never thought I’d end up singing with them.”

She doesn’t mind being the only woman in the band, though it can occasionally get a bit lonely.

“Sometimes you feel like having a bit of female company. But most of the time it’s great. I hang off the guys like a leech. They’re good value. There’s never a dull moment. Besides, most of the time we’re busy, we don’t have time for ourselves.”

One of the great things about being in Yothu Yindi has been the travelling “South Africa was amazing. Soweto was fantastic but it was also very sad. It feels very different to Australia. There is so much tension there and a lot of hatred around in the air. There were just so many people and there was so much poverty. And the sad thing is, there’s nothing you can do about it. But when we did the concert, these people were enthralled by us. For them to hear our music, it gave them a chance to see that they can express their music as well and to not feel ashamed.”

Another place that stands out in her travels is Beijing.

“We were really only there overnight, for 10 hours and it was quite a culture shock. We were filming a television commercial for Qantas on the Great Wall of China. That was such a thrill. When you think that it’s the only thing on earth besides the Great Barrier Reef you can see from outer space.”

Jodie says she often gets a surprised response from people overseas.

“They say, ‘You’re not Aborigine are you’. I’m like, ‘Why not?’ I don’t quite know what they’re expecting. But it could be that they’ve only seen movies like Crocodile Dundee and they expect me to be dark. And they see me and I’m fair.”

As for the future, Jodie is planning to stay with Yothu Yindi. She’s also developing her own music.

“I love being with Yothu Yindi. It’s a really good feeling as an Aboriginal woman, it’s the most refreshing, replenishing feeling. At the moment, I’m also writing a few songs and playing a bit of guitar. I went to see Paul Kelly the other night. It’s the first time I’ve had a chance to listen to him properly. And it was just wonderful. He sang about his view of the world and it just goes to show you you can write about anything.”

Still pretty young herself, Jodie’s got some solid advice for young people. “Have faith in yourself, because you can do anything. I’ve got younger sisters and I try to encourage them as much as possible, so they don’t feel shy. That’s the problem, nobody’s encouraging young people. I say to people, go on play the guitar, if you want to. If you want to do music, do it. If you want to be an artist, do it.”

And some final words of advice. “Just be happy in what you’re doing and always keep an open mind. Do it for yourself.”