This month Nicky Winmar caught up with David Liddiard, Chief Executive of the National Aboriginal Sports Corporation Australia (NASCA). Nasca IS A “NOT FOR PROFIT” organisation working with and for Aboriginal sports people.

Nicky: What is the National Aboriginal Sports Corporation Australia? 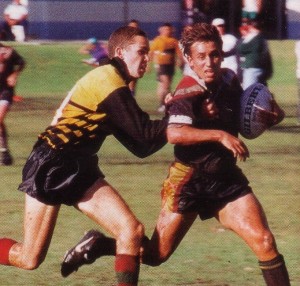 David: The National Aboriginal Sports Corporation Australia (NASCA) was established in 1995 for Aboriginal sports people to be used as a springboard to greater success in education and employment.

NASCA has been set up as a support network for young Aboriginal sporting stars. At this stage we are looking at rugby league, golf, tennis and netball. When young sports stars sign contracts with say, Rugby League clubs in Sydney we put them on our computer profile system and make sure they are looked after properly when they come to the big smoke. We attempt to get them jobs and involve them in Sports Traineeships where possible.

Nicky: What age group is this?

David: We are looking at this stage 15 years and over so it is an open age. Not only that we also put on sporting events. We have played twice in the Coca Cola World 7’s; we had two of our own Indigenous Rugby League 7’s Tournaments, one in Dubbo and the other on the Gold Coast.

David: It went really well, we are going to take this tournament to Townsville in October this year and hopefully get 40 all black sides to play in it. We are also looking at an Aboriginal netball tournament.

Nicky: With the rugby there are so many Aboriginal players now, it is good to see.

David: Yes definitely, they are coming from all over the place. I took a team to the United Kingdom and out of that side we’ve got about ten players that have signed contracts with Sydney clubs.

Nicky: Are there many girls involved in the netball tournament?

David: We haven’t had one yet but we want to put together a netball tournament. Our first one will be in Townsville in October. We will be talking to teams from around Australia that are interested to come and compete.

Nicky: It would be a good opportunity for them, in sport as well as with education and jobs.

David: That is right. With our sports Traineeships we might be able to get them a job at the same time.

Nicky: There are so many kids in that young age group going to the cities. It is a different sort of place for them.

David: It is and they are a long way from home. Aboriginal people need to be sort of looked after. We come from a family environment and when they get to the city they may get thrown in a flat on their own and they are not looked after. In four weeks they might just go back home. NASCA want to stop that. We have a support network, we organise social events like golf and trips to the casino for a night or just everyone get together and stay in contact. We are trying to line up a mentor scheme where young Aboriginal Rugby League players or whoever will be placed with mentors. That way they can go to them when they feel a bit lonely, homesick, have problems with work or whatever the problem may be.

Nicky: With leaving home, I left home when I was 16 and went and played in Perth. I was still in the same area as my folks but they were in the country and I still found it very hard to try and live the city life but then I had a chance to do something with my life. It is always hard but it is only a short time not a long time, it goes so quick.

David: Well that is what we are here for. We run sporting events and clubs send talent scouts out to see kids play. If they want to go on and sign contracts they can and we have a support network up here from Sydney where they can come to us for help. We can look after their financial affairs, invest their money for them and do their contracts. We don’t charge a big percentage; we just charge a minimum fee but that all goes back in to putting on sporting events and looking after the next person that comes along. We are not here to make a profit, we are just to make sure that they get looked after properly and given the opportunity to compete on the same levels as everybody else.