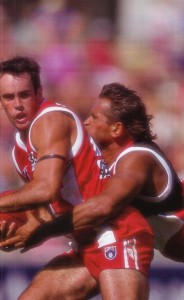 Walking down a Melbourne street with Nicky Winmar is an amazing experience, People idolise him. Forget the rock ‘n’ roll stars, forget the movie stars, in Victoria football rules and Nicky Winmar is a living legend.

From Pingelly in Western Australia Nicky Winmar is St. Kilda Football Club’s sensation. And he is on fire and is ready to re-establish himself as one of the game’s most elite players.

‘It is what I do best and what I started out doing best in my life,” Nicky said.

“I just go out and play each game as if it is my last game,” he added.

When Deadly Vibe caught up with Nicky he had just played his 186th game of his football career and was really looking forward to playing his 200th.

In 1989 Nicky was winner of St Kilda’s Best and Fairest Award and was selected for the All-Australians in 1991 and 1995. But Nicky says the highlight of his football career was being inducted (as the first Aboriginal life

Nicky began his professional football career with South Fremantle in 1983 where he played 58 games. In 1986 he began playing for St Kilda Football Club.

And of you involved in high level sports will agree with Nicky when he says “You have to be dedicated and make sacrifices.”

Many of us remember the landmark statement made by Nicky Winmar on the issue of racial abuse on the sports field. That was back in 1993 when the Collingwood crowd vilified Nicky. In response Nicky lifted his jumper

and pointed proudly to his skin, an action supported by most Australian’s. In 1995, the Australian Football League introduced a code of conduct prohibiting racist behaviour.

Australian Rules Football is uniquely Australian. It is now a multi-million dollar business with a national competition and many smaller leagues. The popularity of the game is considered at an all-time high within Australia.

Aussie Rules is the main code of football in Victoria, Western Australia, South Australia, Tasmania, the Northern Territory and has a dedicated following in the Australian Capital Territory. It is also played in Queensland

and New South Wales but runs second to Rugby League in terms of popularity in those states.

“Keep setting goals”, Nicky says. “There are always distractions in your life but keep your mind focussed.”