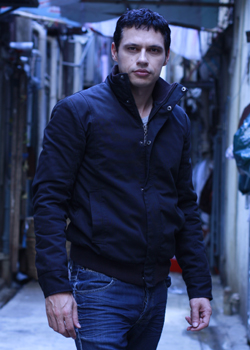 The film Dreamland marks the beginning of a journey to a new way of filmmaking for Ivan Sen.

Ivan Sen has created another masterpiece with his latest feature film Dreamland, which follows his widely acclaimed and awarded 2002 film Beneath Clouds.

Known in the industry as a multihypenate, meaning a writer?director, cinematographer, editor, composer and producer, there’s no doubt Ivan Sen can multi?task. At the same time Deadly Vibe is interviewing Ivan in Hong Kong via Skype, he’s on his computer outputting a version of Dreamland for cinematic release. We’re impressed!

“The scope is unbelievable for the quality you can get these days at home. I just take my drive out and plug it in at Greater Union and away you go. I couldn’t have done this three to five years ago,” he says.

Dreamland is a sci?fi extraterrestrial film like nothing you’ve seen before. For example, the main character Dan Freeman, played by Australian actor Daniel Roberts, doesn’t utter a word throughout the film’s entire 86 minutes. It was made with 35 hours of film that Ivan shot over a six-week period in the Nevada desert, in the US, a well-known hotspot for UFO sightings and extraterrestrial activity. Ivan combined his footage with archival footage from NASA and brought it all together with soundscapes.

“I do think that the whole thing of other worlds and other life is something that everyone is interested in – the human quest that is always looking for something different, the wonder of the universe and the magic and mystery… that’s enough for me. It’s something you can’t really put into words. That’s why I made a film about it,” said Ivan.

The film screened last month at the Melbourne International Film Festival in July and at market screenings in France before that, and film critics are already predicting that Dreamland will become a cult classic among sci?fi film fans. Compared to most Hollywood or Australian features, Dreamland is a low-budget film, but Ivan is being lauded for its technical brilliance.

The idea for Dreamland began in 2002 when Ivan went on holiday to the famous top secret military base called Area 51, in Nevada near Las Vegas. He knew he had to make a film there to capture the amazing visual beauty and mysterious ambience he experienced. This coupled with a lot of time spent isolated in a New South Wales cabin brought Ivan closer to nature. He says he connected with the natural universe and what followed was an epiphany.

Ivan took a punt on making Dreamland his way and he has been rewarded with creative freedom and a self?awareness to follow his own instincts and not follow the Hollywood model for making films.

Now with Dreamland on the film festival circuits and in cinemas later in the year, Ivan is pleased about the outcomes of his more recent film, which he is currently editing titled, Toomelah. It’s a story about a 10-year-old boy and some teenagers in a little Aboriginal community. He says it’s a film that he has written and shot consciously with a strong self?awareness and a specific audience in mind. It is unique thematically and uses the whole community of the town of Toomelah, NSW, where Ivan grew up, as actors in the film. He says his key goal was to mould the script around the natural abilities of the community and in doing so he’s captured some amazing performances.

“I was the only person to go into Toomelah to shoot the film and that allowed me to get very naturalistic, pure responses on camera. I would shoot performances and get the community to improvise around it. I’d make up stuff on the spot. It’s so real, it’s incredible,” says Ivan.

Obviously he’s very happy with the results of his new way of filmmaking, although it’s very different to his first film, Beneath Clouds, which had a $2.5 million budget.

“That was the more commercial Hollywood model – of having the whole circus, about just getting something shot, but not caring about the end product, the audience or capturing something truthful or special. In those [types of] films you lose a sense of what you are doing. I’ve moved away from that whole circus approach,” says Ivan.

Just as Dreamland the film might get you thinking about the universe and your place in it, it may well be that the whole film industry also needs to readjust itself to new pathways, like the ones Ivan Sen is taking.

“Nowadays I don’t really watch films,” says Ivan. “I’m so busy trying to focus on my own evolution. I just respond to what I see and feel or hear.”