A young Aboriginal woman on her very first photo shoot has made the cover of a digital fashion magazine, in a first for the publication. 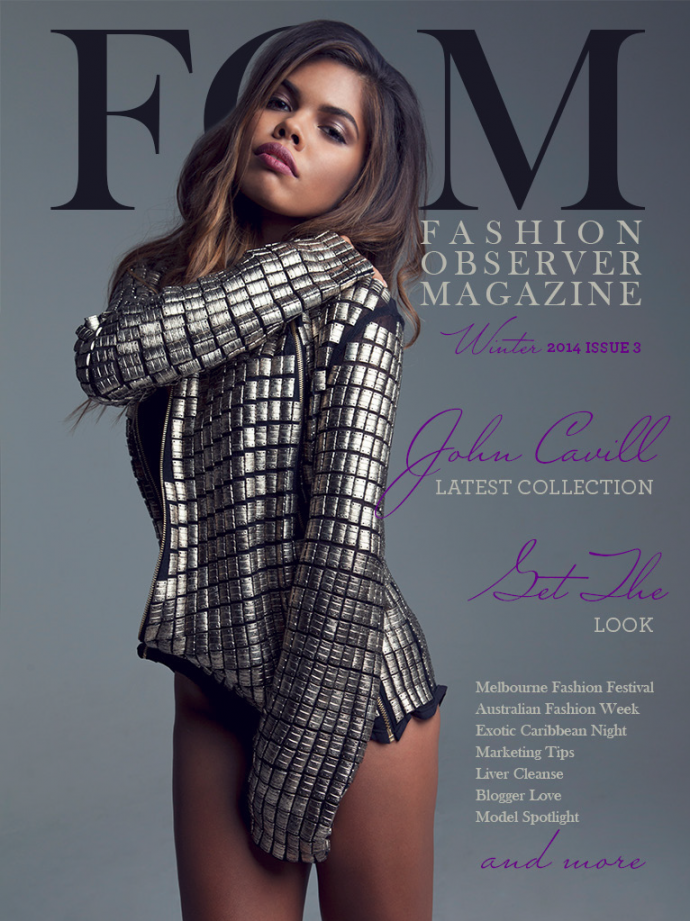 Tiahna Oxenham on the cover of The Fashion Observer Magazine.

The Fashion Observer Magazine shoot came through 17 year old Yawuru/Nyulnyul woman Tiahna Oxenham participation in the Dreamtime Project – a program with a vision of empowering the Indigenous community through fashion and the arts.

“I had no idea that I would make the cover. My Aunty told me the news while I was still asleep in the morning and I could not believe it,” Tiahna says.

“To be on the cover is a very proud moment for all Aboriginal people and reinforces the message that you can do whatever you want to do in life if you put your mind to it, work hard and never give up.

“It has not changed me as I am still focussed on my education to become a marine biologist, however, I will use this opportunity to assist in empowering and inspiring other Indigenous young people.”

Women’s empowerment through health, wellbeing, nutrition, exercise and training initiatives is a constant focus of The Dreamtime Project.

Another first for The Dreamtime Project is Jahlana Roe, a Yawuru woman and model for the Project. Jahlana has secured the campaign for Atlas Pearls & Perfumes for their Indonesian stores, which was shot by world renowned photographer Russell James in Bali.

This achievement is followed by Jahlana showcasing during New York Fashion Week last year alongside Lisa-Marie Rodd – Banyjima woman from Karratha. Jahlana will be in front of the camera again in August shooting the campaign for Cebiche Swimwear.

“As an Aboriginal Woman, to have these experiences is something I can now go back into my community and share. This is what I am passionate about and I want to become a mentor for Aboriginal young people,” Jahlana says.

“The Dreamtime Project has given me a new found confidence that has empowered me to know with dedication and hard work, that anything is possible.”

The genesis for The Dreamtime Project came from a lack of Aboriginal representation and opportunities in the fashion industry.

Project Manager, Sylvia Giacci, recognised the absence of Aboriginal creatives and models in the fashion industry and has set about the last six years to create a major shift in social consciousness.

“Through the success of our young Aboriginal women, we are fostering a positive cultural image of Aboriginal people, engaging with fashion as a platform to create awareness and to steer away from the disproportionate representation so often depicted in the public domain,” Sylvia says.

“This is a very holistic program that far exceeds trying to find the next Aboriginal Supermodel. It is based on the principles of healing, spirituality and culture.

“Once each individual’s ‘Blue Print’ and passion is brought to light, we can then create the pathways for education, training and employment.”

The Dreamtime Project will launch in August with an invite only cocktail party followed by the commencement of the workshops in Perth, followed by the Pilbara and The Kimberley.