A Kimberly tourism company is leading the way with their Indigenous cultural tours to help keep our land sacred, while providing accurate stories and history to travellers. 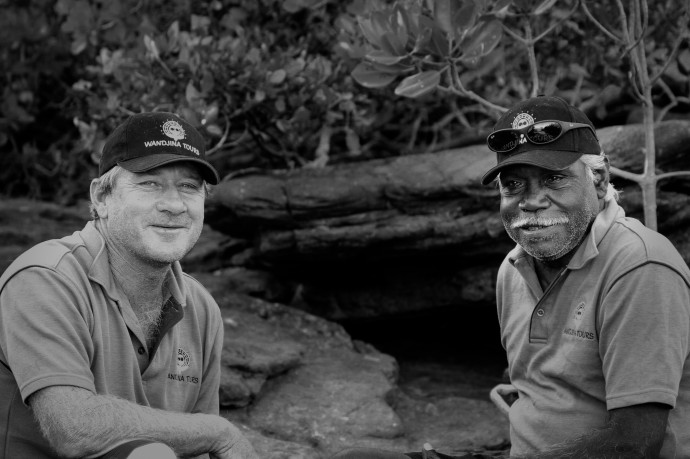 Wandjina Tours is run by Peter Tucker and Larrinyuwai man Donny Woolgoodja, along with more than eight employees including cultural advisors to keep the connection to land strong and accurate.

“We offer tourists a glimpse of the culture that exists up here on the Kimberly coast,” Peter explains.

“We both shared a vision together that we needed to get the younger people in particular back up on country because everybody had been taken away in the 50’s,” Peter says.

“Through my already established business and infrastructure, in this very isolated patch of the Kimberly Coast we decided collectively to start a business where we get the young people involved and train them up in various facets of tourism.”

Perhaps one of the most secluded and isolated places in Australia, the Kimberly coastal region has popped up as a tourism hotspot of late.

“There has been a burgeoning cruise ship industry happen, just overnight. It’s become an iconic destination for both Australian companies and international companies,” Peter says.

“Of course they were visiting a lot of the cultural sites around here without permission and without any regulation. We decided one way of controlling the numbers, but more importantly having that interaction between the traditional owners and the tourists, was to approach the tourist boat.”

Wandjina offered to help the companies educate their visitors by telling them authentic Indigenous stories of the land.

Now the company has gotten seven or eight of the cruise ships on board, out of the 14 who travel up and down the coastline.

“The grand vision is to establish quite a good, solid tourism base here at Freshwater Cove and have people live here fulltime for the season which is about seven months of the year,” Peter says.

“They then have fulltime employment, but increase the numbers and have a lot more interaction with the cruise bunch and eventually even take guides and traditional owners on the cruise boats themselves as they pass through Worora country.”

The clever idea by Peter and Donny has provided promising careers for their employees in such a remote area and has been well received by the Indigenous community as a whole.

“They’ve embraced it and they’re very happy that now they can access their country again and have some gainful employment for the kids and for the people. It’s been very warmly welcomed,” Peter says.