For Bryce Bevan, a childhood adoration of horses, coupled with relentless devotion, has seen him win an exclusive scholarship that will take his passion for the equine industry to a whole new level as he jet-sets to Ireland in the coming months.

Bryce, 24, is one of only three Australians among 12 in the world to win the two-year Darley Flying Start Scholarship – a prestigious management training program for the thoroughbred industry that combines a dynamic range of lectures, visits and hands-on experience.

An Albany man, Bryce recently completed his Honours at The University of Western Australia (UWA) and has a Bachelor of Agricultural Science and a Bachelor of Commerce. He says he’s been working towards the scholarship ever since it came to his attention in 2010. 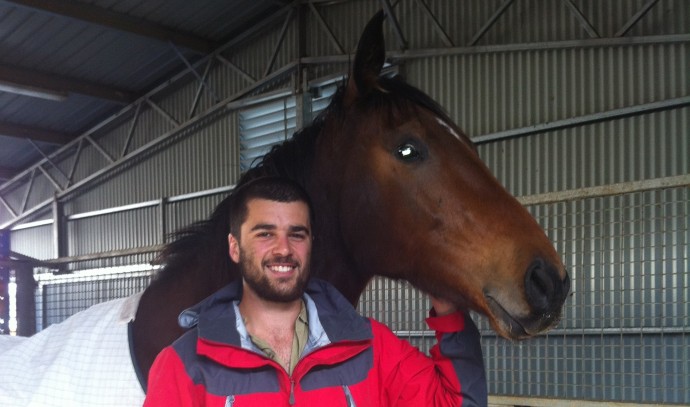 Bryce (pictured with Eiffel) is undertaking a prestigious scholarship in August that will widen his knowledge and skill set in the Equine industry.

“Basically, from that point when I first heard about it, everything I’ve been doing in terms of work placements and stuff at uni has been with that in mind; trying to figure out how it would help me, and trying to do things that would put me a step closer to being potentially successful with the program,” he says.

The prestigious scholarship has a rigorous application process including a meticulous written application, sending videos of him working with the horses, online and written assessments, and a face-to-face interview with Darley management.

“It could have gone either way, to be honest. It was my first interview since I graduated from uni, so I didn’t know what to expect. A few people had told me about it who had gone and done it before but, yeah, obviously it all worked out in the end,” he says.

“I’m absolutely stoked to be selected for the program.”

Bryce admits he didn’t really come from a background in the equine industry but his grandfather, Keith Bevan, ignited his love for horses.

“From a young age my grandad was involved in racing and the trots as well. I went along to a couple of race meets with him when I was about seven or eight-years-old and it basically progressed from there,” he says.

Bryce gained his trainer’s and reinsman’s licence in the standardbred industry when he was 18, as well as completing several work placements in the thoroughbred industry in conjunction with his university studies – including work experience with auction house, Magic Millions, and Perth trainer, Simon Miller. 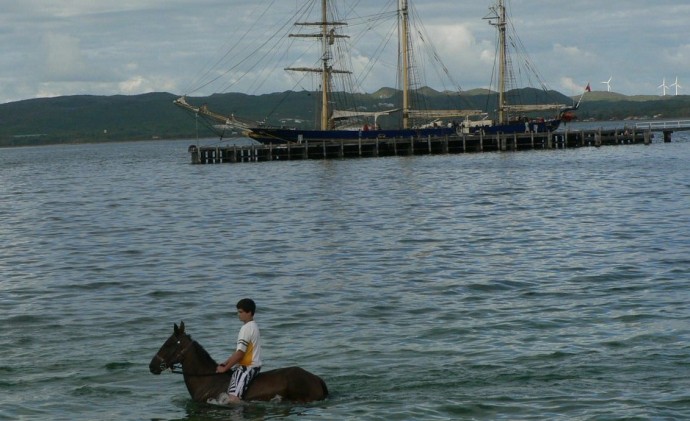 Bryce’s love for horses began when his grandad, Keith, started taking him to race meets.

“Once I got to uni, I made the conscious decision to pursue a career in the thoroughbred industry because there’s a bit more of a light at the end of the tunnel and I’ve also been interested in the industry,” he says.

“But it was just the case of making the decision to actively pursue experience within that industry and, once I started doing that, that’s how I found out about the program, by going to a meeting with the manager of Magic Millions.”

Career outcomes from the program span racing, media, bloodstock, sales, consultancy, veterinary, and marketing. For Bryce, breeding and stud management are the areas to which he aspires.

“I hope that, obviously, I’ve gotten some great experiences out of it and a big thing with the program, I’ve been told, is networking. So meeting and working alongside a lot of really well regarded industry professionals,” he says.

“Hopefully that will hold me in good stead once I finish the program in terms of career prospects.

“Apparently it’s pretty full on, but I’m looking forward to getting started.”

Whilst studying at UWA, Bryce was an exchange student at Indiana University in the US and, as part of the Darley Program, he will get to go over to the US again, as well as the United Kingdom, Dubai and Sydney, Australia to gain more invaluable experience.

“I’m probably most excited about Dubai, just because it’s something different, it’s a place I’ve never been before, and it’s somewhere people don’t get to spend a lot of time in,” he says.

“To actually get the opportunity to work there and, I mean, the richest horserace in the world is there – the Dubai World Cup – and we get to witness that while we’re there. I’m probably more excited for that just because it’ll be a real cultural difference.”

“Putting yourself out there to people, making yourself known, letting them know you’re willing to participate and get involved and, most importantly, learn the ins-and-outs of whatever industry you want to pursue, you can generally do anything,” says Bryce.

“That’s probably the take-away message for me.”