Growing up at the La Perouse Aboriginal Mission in a shack with dirt floors, a hessian door, and gaping holes in the galvanised tin walls, William Victor Simms’ life was already looking grim, but the young Bidjigal man would soon go from struggle to stardom. 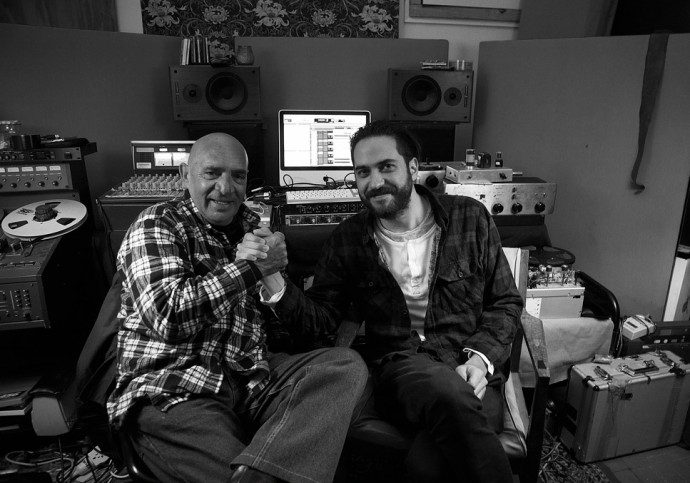 A pioneer of Aboriginal music, Vic Simms, with the man who’s bringing it back to life, Luke Peacock.

William, better known as Vic or Vicky, started performing at the age of 12 with Col Joye’s troupe of musicians at the Manly Jazzorama Music Festival in 1957. And soon after, at the age of 15, Vic released Yo-Yo Heart through Festival Records.

However, Vic’s string of national performances and TV appearances were short lived. He soon discovered his money was finite and he had a weakness for alcohol; his life quickly spiralled out of control as he became a 17-year-old alcoholic.

As a result of a robbery in 1968, Vic, aged 22, landed in the notorious Bathurst Gaol with a seven year sentence. But it may have been a blessing in disguise, as Vic got back to what he loved: the music. He learnt how to play guitar, started writing songs and, five years later, his music was heard by the Robin Hood Foundation and they sent a tape to the Radio Corporation of America. RCA then organised for him to record an album.

Recorded in one hour in a mobile studio at the prison, The Loner has been described as “Australia’s great lost classic album of black protest music”. When they say “lost”, it’s because the album was deleted from RCA’s catalogue because Vic stopped touring the album, as he felt he was being used as a puppet to promote the correctional facilities, even though destructive inmate protests against poor living conditions would show the contrary. “Lost”, that is, until now.

Brisbane based musician, Luke Peacock, is bringing The Loner back to life with the help of the Cairns rock band, The Medics, Australian rock music icon, Paul Kelly, You Am I’s, Rusty Hopkinson, and Vic himself – just to name a few.

“I was, sort of, digitizing a whole bunch of stuff which basically means transferring it from analogue recordings, vinyls, and cassettes onto a computer, so we had a digital archive and something we could access a bit easier and preserve the original recordings,” says former 98.8fm Brisbane employee, Luke, as to how the project started.

“At some point The Loner came across the desk, and that was where I got to hear the album properly. I had heard the songs playing at the radio station but it wasn’t until then that I actually had the headphones on and could hear the lyrics clearly, and how magnificent it all was.”

Vic’s music gave Luke an instant sense of self.

“The characters are people I know, or have known. The stories and the observations seem so familiar to me. They probably would to most people in one way or another. This is not a man who is marching in the streets and preaching politics, he just speaks the truth about his feelings and his life and does it to a groove and a great melody. That’ll move people more than a history book ever could.”

The Project has been dubbed The Painted Ladies – a name derived from the lyrics in a highlight from the album, Try to Understand.

“I just thought that was such a fantastic line and we were throwing names around trying to come up with something to call the whole collaboration and that one got thrown up in the air, and everyone loved it, so we ran with it.”

Although Luke says it was no walk in the park, reviving the work of one of our Aboriginal music pioneers is well worth it.

“It’s the largest task I’ve ever taken on. I kind of knew that like any big project there’d be some stumbling blocks and things like that. In hindsight, I think it was actually surprisingly easy when I look back and see what we achieved,” he says.

You can find more information on Painted Ladies: Selections from the Loner, which was released June 6, and the accompanying documentary HERE.