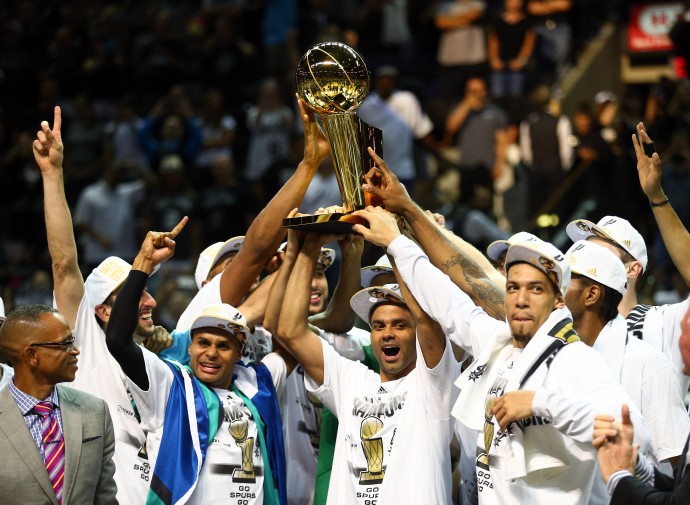 Patty, draped in the Torres Strait flag, became the first Indigenous Australian to win an NBA championship upon the Spurs’ victory against the Heat. Photo: Getty Images.

Twenty five-year-old Mills could do no wrong, after coming off the bench in game five of the best of seven game series to score 17 points in 18 minutes, extinguishing the Heat’s flame and denying them their third straight NBA championship, 104-87.

“You’re a part of this win, as much as anyone. I can’t tell you how nice and genuine the people of San Antonio are compared to anyone else; it reminds me a lot of Australia.

“This one is for you [the fans] and thanks for all your support.”

With talks of multi-million dollar contract offers in the mix, a now off-contract Mills will soon have a tough decision to make when lucrative offers start rolling in from rival clubs. But for now, he’s happy celebrating the Spurs’ win.

“People keep asking me [about my future] but I honestly haven’t thought about it,” Mills told the Sydney Morning Herald.

“I don’t even know how the free agency works. I don’t know when it starts; I’m just trying to soak everything in and live in this moment. I want to make the most of it.

“To have any other thoughts in my mind other than the championship … this is a feeling you don’t want to be distracted from, it’s unbelievable.”

The 183cm, 84kg point-guard may not be the tallest or strongest player on the court, but for what Patty lacks in size, he makes up for in speed and accuracy. This skill has seen him go from a towel-waving benchwarmer to a genuine impact player.

Patty only played 13 minutes in the NBA finals last year, but an off-season fitness regime and personal chef has seen him reach a new level of fitness.

“His energy has been important all season long. That energy, that team sense he has, has become infectious for everyone,” says Spurs coach Gregg Popovich.

Mills has always worn his Indigenous Australian colours proudly, and as the Spurs celebrated their victory, he draped himself with the Torres Strait Island flag. Now, Patrick’s against the odds journey from humble beginning to the very elite level of international sport will be brought to the screen, with a documentary by photographer and videographer, Rush, currently in the works.