In a sport that is overwhelmingly dominated by incredible athletes, mainly tall, fast and agile African-American men, it’s not too often that one of our own makes the cut, but the first Indigenous Australian to play in the NBA, Nathan Jawai, has achieved this amazing feat and is making a name for himself the world over.

Nate has played in the NBL, NBA and the Euroleague, and he says that it’s an amazing feeling to be the first Torres Strait Islander man to be drafted in the NBA.

“It feels very special. I’m proud of it, I’m proud of our people and obviously Patrick (Mills)… I’m very proud for him to be able to be in the NBA, too – he’s done a great job. Me, being the first, and him, being the second, it’s special, you know?” he says. 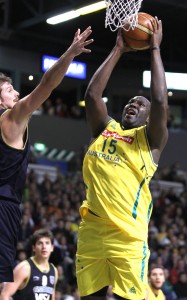 At the moment, Nate is training at the Australian institute of Sport (AIS) in Canberra. He’s taking a break from playing for the Turkish team Galatasaray Liv Hospital, based in Istanbul, because of a neck injury that he sustained last year.

“It was a very bad neck injury and concussion that I had in Istanbul this season and I’m just taking some time off to basically get myself right and take it easy,” he explains.

As well as having lived in Turkey, Nate also lived in the USA and he has played in many other parts of the globe. He says he misses Aussie food when he’s away, but the experience has been a blessing and makes him a good role model for our kids.

“I get to see different places and meet different people, make friends in different countries. It’s tough because you don’t have the Island food, your family is far away and you’re away for basically the whole year,” he says.

“It’s definitely getting tougher for me over the years because I’m starting to miss all the stuff back at home, but being Indigenous and travelling all over the world can also make an example for young kids out there. They can do it, if Pat and I can do it.”

He says that Spain was his favourite country because it suited his relaxed personality. However, that relaxed nature doesn’t flow over to his sport. In fact, Nathan’s very clear on where he’s headed: the Australian Men’s National Basketball Team.

After that, Nate says that he will go with whatever opportunity suits him the best and he will continue to represent his people.

On his American travels, Nate was compared to the legendary basketball legend Shaquille O’Neal because of their apparent likeness. This resulted in nicknames like ‘Outback Shaq’ and ‘Baby Shaq’, but for now, he prefers ‘Nate’.

“We’re different players, you know? He’s an NBA Hall of Famer. I can see that we have comparisons that we’re big, but he’s bigger than me, I don’t think we look alike, I think it’s just the physique and the size, and I’m pretty agile for my size,” he says.

“It’s good to be compared to a Hall of Famer in the best league in the world, but at this time I’m nowhere as near as good as he is.”

However, Nate is still an exceptional athlete. His career, which is still blossoming, has been filled with plenty of incredible accomplishments.

“Winning the Serbian National Championships, I guess, obviously the NBA draft, and making the final four in the Euroleague, which is the second best league in the world in my opinion”, he says of his accomplishments.

“When I started playing at 17 I was so far behind, but I kept on hanging in there and it changed for me. Now I love the game. It’s a big part of my life right now.”