For Torres Strait Islander musician Dave Dow, music was an integral part of growing up. He wouldn’t have been able to escape it if he tried, but he didn’t want to. Rather, he embraced it and made it his life. 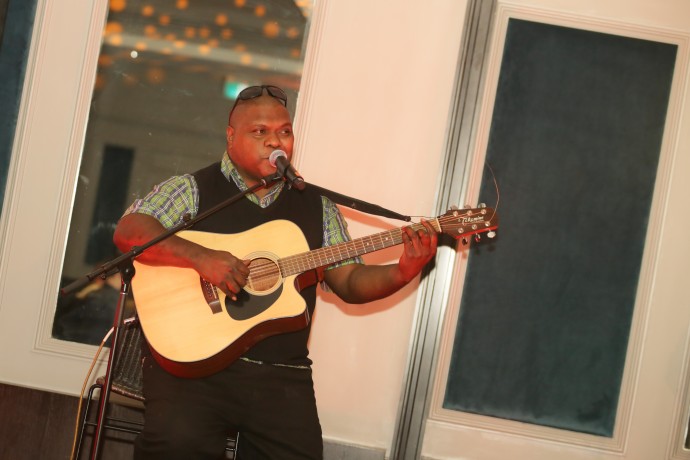 Dave Dow performing at the 2014 SEWB conference in Brisbane

“We’d hear music 24/7 in the house for a long time. So we just grew up with it. And then having a musical family: uncles and aunties, if they weren’t musicians they were professional dancers,” says Dave.

Dave has played all around the country as well as internationally. He has lent his suited-for-any-occasion set and supported acts like Yothu Yindi, Coloured Stone, and Russell Crowe (Yes, he sings).

Catering to all crowds willing to tap a foot and have a good time, Dave’s sound is an amalgamation of the musical genres he grew up with, from church gospel music all the way to rock ‘n’ roll.

“We were already engrained doing music; it was almost second nature. I think we started singing at the ages of two and three – I say ‘we’ because I have one sibling in the family, my brother Dan,” explains Dave.

“I’d say [my music is] a collective, melting pot or fusion of pretty much everything that’s been sort of downloaded…inputted into my life, and into my head.”

Although he plays for all, Dave loves performing for his home crowd even if compromises must be made.

“It’s not good for my bread and butter on the table but it…karma, you know, it will come back around somehow.”

“The pleasure I get when I perform for our mob is performing for our Elders. It’s more for the Elders than for our generation today because for me it’s like I’m giving back to them,” he says.

Dave wasn’t the only fruit that came from the musical family tree. He is the cousin of Busby Marou’s, Jeremy Marou, and although he’s “not getting the royalties as fast as he is yet”, he loves spreading his music and the message it resonates.

“Racism has always been a big, strong issue that I feel strongly about,” explains Dave.

“It’s great playing in places where they don’t get a lot of Indigenous guys playing where I can change mentalities and mindsets. I think that’s probably the deepest thing that involves me and my craft.”

For now, Dave will continue to spread his music, message and put food on the table, but being raised “internationally minded”, Dave is determined to live out his dream: being recognised far beyond our shores and making a good living off what he loves.

“I’ve just got to pick up the work and keep doing it whilst trying to make my way towards the dream.”