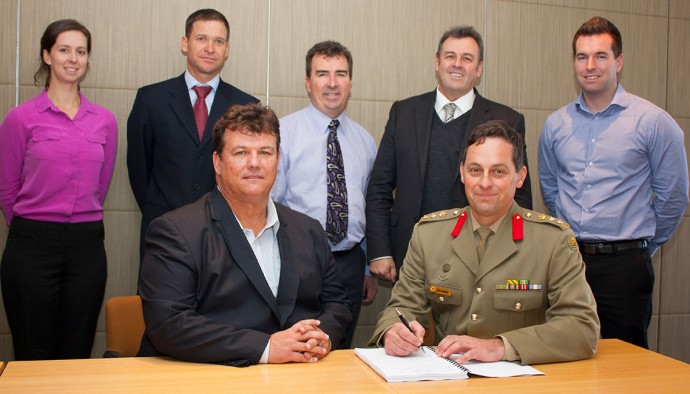 Westpac Bank has awarded digital teleconferencing company Message Stick a contract worth $10 million for their services, while Sydney-based and Indigenous company Pacific Services Group Holdings (PSG) has received a $6m for an Australian Government construction project.

PSG will be the head contractor constructing buildings for the new Navy landing craft at HMAS Waterhen in Sydney Harbour. This will include the berthing, training, maintenance and storage facilities.

“We’re building a wharf for these new boats to come in and dock; we’re building a dry dock and we’re also doing some fit out work on their training facilities and debriefing rooms, and their accommodation,” CEO of PSG Shane Jacobs says.

PSG says the contacts between themselves and subcontractors working on the project will include a clause whereby 15% of the subcontractor’s employees must be Indigenous.

“We will employ three or four (Indigenous) cadets down there and one of them will go through to do a diploma with the partnership that we have with the University of Technology, Sydney.”

Deadly Vibe Wire spoke to Shane the day before work was due to start and PSG was firmly focussed on delivering.

“We’re in delivery phase now, so to us it’s all about delivering it on time and on budget. That way the client’s happy, we’re happy and hopefully more work will come from it,” Shane says.

“Message Stick is a founding member of Supply Nation and has continuously set the bar high for our Certified Suppliers since their foundation,” Charles says.

“The benefit of high value contracts such as this are twofold. Not only do they benefit the organisations in question, but the rewards also filter though to wider Indigenous communities via employment and growth.

“I look forward to seeing other corporate and government members follow the lead of Westpac and the Department of Industry by placing their support and belief in Supply Nation’s Certified Suppliers.”