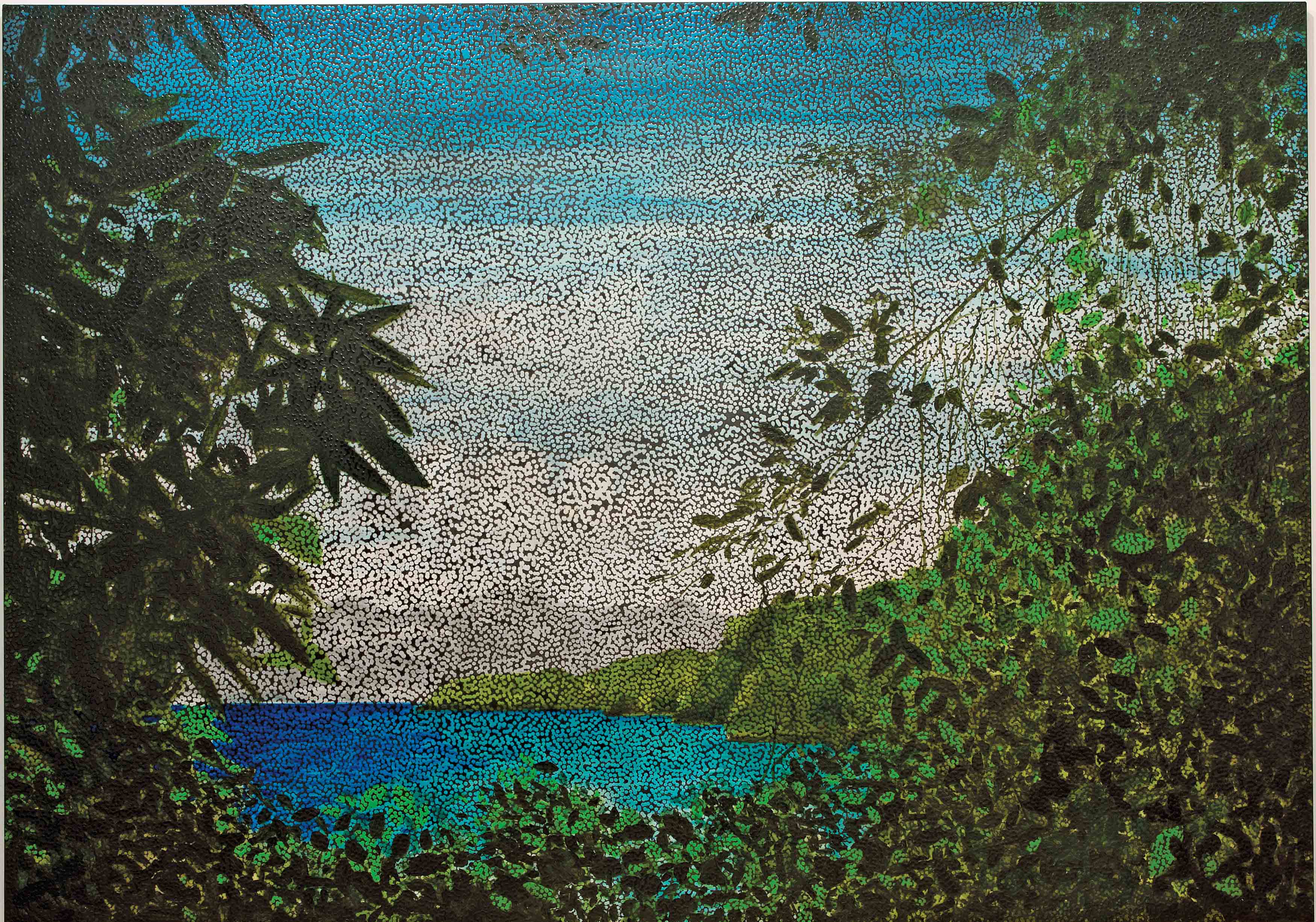 Leading Indigenous artist Daniel Boyd has just won the 2014 Bulgari Art Award for his work Untitled 2014.The prize, valued at $80,000, includes an artist residency in Italy, making it one of the most valuable art prizes in Australia.

The winning work references Pentecost Island in Vanuatu, the birthplace of Boyd’s great great grandfather, who was taken from Vanuatu to work in the Queensland sugarcane fields in the late 1800s. This happened during the dark period of ‘blackbirding’, when employers from various countries ‘recruited’ Pacific Island people as labourers, often through use of force.

Observation and self-reflection are at the heart of moving artworks, and Daniel has spent a lot of time reflecting and considering his cultural inheritance. His work often references the history of colonialism in Australia and transforms archival images into paintings rendered in dots, representing a cultural lens.

He sees the events of the past not as static, but as something that is continually informing and affecting the lives of all of those in the present

“I guess Untitled 2014 is about inheritance in a way,” says Daniel. “The dots are meant to represent a cultural lens, how a culture views something and allowing other understandings of history.

“The work acknowledges my incomprehension of that landscape, the idea of what we inherit and what we don’t inherit – what’s been lost through colonisation and colonialism. It’s about not being able to fully comprehend that past and also the future as well, knowing you’ll never be able to fully understand it.”

“I was always drawn to it. I drew a lot as a kid. Looking at the human form was always interesting to me, the representation of things. I guess drawing for me is about challenging and pushing myself,” Daniel says

Daniel studied formally at the School of Art at ANU in Canberra where he says he was able to develop his work through meeting other Indigenous artists.

“I met Indigenous curators and academics and it was good to know there were these people who had been where I was and were able to answer the questions that I had,” says Daniel.

“I wasn’t the most outgoing person, so it was good for me to make those connections. I spent a lot of time by myself in the library and kind of by default I started to research and understand the theory behind art and how my work kind of fitted in to that.

Daniel has worked consistently since then, having exhibited as part of a group and as a solo artist in Australia and Europe – somewhere he’s looking forward to getting back to, thanks to the Bulgari prize, which includes a residency in Italy.

“I’ve been to Venice before, but it will be nice to see the rest of Italy,” he says.

“I love Italian food so that’s very exciting, but what I’m really looking forward to is seeing a lot of the art firsthand – paintings, buildings and architecture that I’ve seen in books as images – that will be a buzz.”

Daniel’s work is held in several major public collections including the National Gallery of Australia and the Museum of Contemporary Art in Sydney, as well as in private collections. His winning work, Untitled 2014, is now part of the Art Gallery of NSW’s collection.