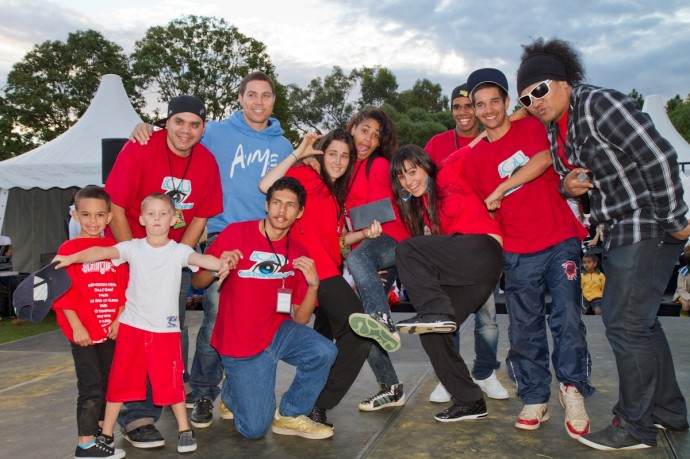 Stylin’ Up is a free event that will be held at CJ Greenfields Sports Complex, Freeman Road, Inala on 24 May from 11am to 6pm. A crowd of at least 10,000 strong are expected to attend to experience a “vibrancy of community expression through music, dance, and grassroots creativity”.

American recording artist, J.Holiday (aka Nahum Grymes) will be headlining the event with talent such as Kaylah Truth, Garret Lyon, Tiama, Xy Latu (aka DJ MasaInI) from “Random”, and Dean Brady as the supporting acts.

Kaylah Truth (aka Kaylah Tyson) is a Brisbane local and emerging rapper who more or less grew up with Stylin’ Up. She says that events like these are crucial in reinforcing community and encouraging self-expression.

“I was right there as a kid when the first one launched in Inala, then I continued to go every year just as someone who loves seeing the performances and getting involved in everything that was happening there,” says Kaylah.

“There is such a community spirit and although it did start out specifically Aboriginal and Torres Strait Islander mob being there, it has spread to all different cultures.”

Stylin’ Up began as an initiative of Brisbane City Council and the Indigenous Community of Inala, and has been nurtured and developed by the Stylin’ Up Community Crew, made up of elders, community leaders and government representatives.

Now in its 13th year, they’re expecting it to be one of the best yet and with the set-list, how could it not be? Kaylah will be performing her debut single “Oh Diva Me” as well as something special for her home crowd.

“We’re going to be trying out our set at Stylin’ Up and seeing how people respond to that, and hopefully everybody likes my new song,” she says.

In the lead up to the festival there is an extensive workshop program that runs for four months, and brings workshops in music creation, beat production, lyric writing, visual and graphic design, as well as dance to the surrounding communities. It is all these elements combined that make it such a special event.

“Honestly, I think Stylin’ (Up) is the most important festival I know locally,” says Kaylah.

“It brings everyone together and, on top of that, everybody who gets the chance to perform – you know, all these young kids are getting up – and they’re gaining more confidence and self-esteem. Then it gives them something to work through, throughout the year in the lead up to the next one.”

Kaylah, who will be supporting American girl group TLC in June, has fond memories of seeing artists such as Selwyn Burns of Coloured Stone, and Shakaya sharing the stage with local community members. It was, in fact, Stylin’ Up that gave Kaylah her first gig.

“It’s not a secret that it’s not highly funded but for me, but I wouldn’t miss it. It’s where I started and I’ll never forget that; it’s an essential part of me as an artist being still a part of that,” she says.

“I hope over the next few years, I’ll actually be able to go back and headline, being even more established as an artist.”

For more information on Stylin’ Up, you can visit www.stylinup.com.au