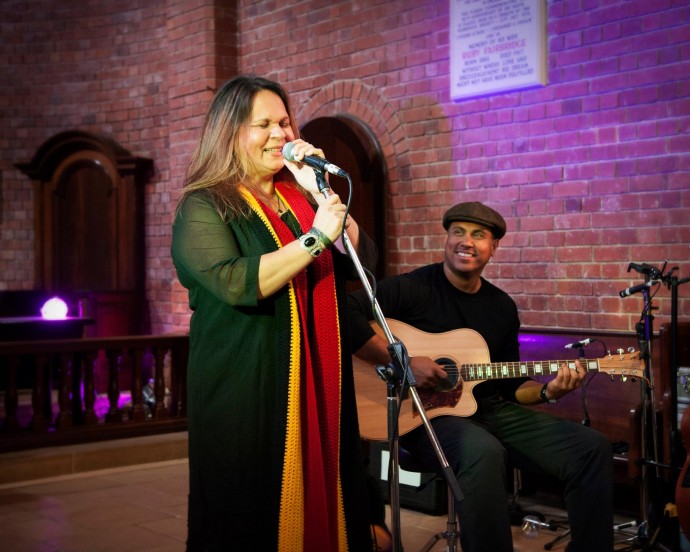 For almost two decades, Gina Williams has been dedicated to the telling of her people’s stories. Gina is a Balladong Noongar woman, with links through her grandmother’s heritage to the Kija people of the East Kimberley.

Nowadays the mother of two is away from the camera, but her storytelling continues through music. And what nobody realised was Gina had a remarkable story of her own to tell.

She has recently released a new album, written and performed in her traditional language, alongside her friend Guy Ghouse.

“The album is called Kalyakoorl; it’s a Noongar word and it means forever. The album is entirely written and performed in Noongar language,” she says.

There are less than 240 speakers of the Noongar language left, making it a very rare language. Gina says the album is informed by four principles; your heart, your family, our land and our children and legacy.

To create songs in language, Gina first had to ask her Elders and community if she had permission to do so.

“I feel really privileged. I feel very humbled to be able to sing in language. It’s something that has taken me a long time to learn. Not only that, but to be given the permission and blessing of our Elders to do this,” she says.

“It’s really important, it’s not just about standing up and singing these songs, they’ve got to have some kind of depth and substance to it, and you can’t do that without a community blessing.”

Although Guy’s family are originally from Malaysia, he was born in Australia and has lived in the community for a quarter of a century.

“He’s what I call an overseas Noongar. He was made in Malaysia and born in Australia. He’s spent over 25 years living in the Kimberly region and working with our mob in music. He’s loved and adored by the entire community basically, and I feel really lucky to work with him,” Gina says.

“I have these words and I have these tunes, and his guitar playing and guitar work is so precise and beautiful. It breathes life into these tunes. It’s great.”

All of Gina’s songs tell a story, with one of them being about paying our respects to the traditional custodians of our land.

“Our dreaming, our traditions, our lifestyle and our law, it’s acknowledging that’s been here forever.”