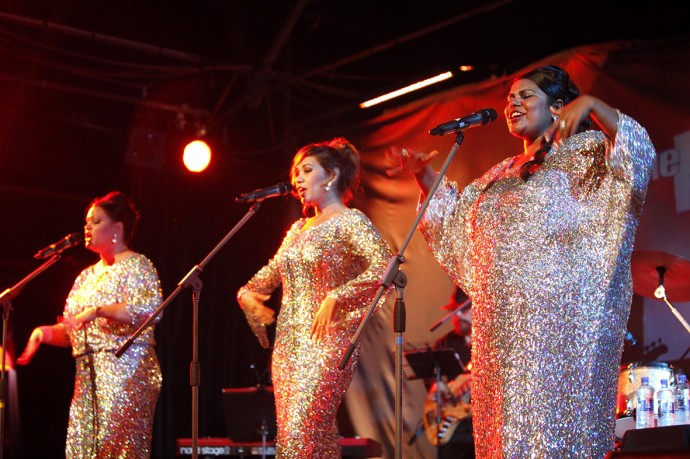 The Merindas (from left to right: Candice, Angela, and Kristel) and are spreading their wings and coming to the east coast to perform for their fans

When multi-award winning artist Candice Lorrae (aka Ulla Shay), up and comer Angela Rule, and emerging talent Kristel Kickett grace the stage, they are The Merindas – a Motown tribute band whose musical reach is beginning to stretch far beyond their stomping ground of Perth.

The Merindas which, in the Eora language means “beautiful woman”, merge country, blues, gospel, soul, R&B and jazz that when coupled with extravagant costumes, interactive sets, and a trio of amazing voices, dazzles audiences.

What started as a “one-off” show when Candice, who is hip hop artist Bryte MC’s wife, was approached by Perth’s Noongar Radio to put together a group to perform Motown hits at the August 2012 premiere of The Sapphires, has manifested into a group that is working rigorously just to keep up with the public’s demand.

“They just expected us to come along and sing Motown hits but we did a little show and then had a standing ovation at the cinema – there were about 500 people there,” she says.

“We had people from the Burswood Crown Casino came up to us and say, ‘Look, if you girls get a band together in the future and put a show together, come and approach us, we’d love to have you at the casino’; and all these other people wanted to book us after.

“We didn’t think it would be an ongoing thing. It was just a one-off show.”

What sets them apart from other cover bands, and original bands for that matter, is that they don’t limit their shows entirely to the music. What you get when you see them live is more of a stage production, and don’t be surprised if you become part of it.

“It’s very interactive. When you see a band they’ve got song pumping, song after song, after song. We like to joke, talk, and have laughs with the audience and get them involved,” she says.

“With ‘My Guy’ by Mary Wells we like to actually grab a guy from the audience, bring them up on stage and we fight over him on stage, so it’s a lot of laughs and fun.”

When they developed their first band show with the band Rhythm 22 at Kulcha three months after performing at The Sapphires premiere, it sold out in just 10 minutes. This is why they’re spreading their wings and bringing their show, ‘The Sweet Sound of Motown Tour’, to Sydney and Melbourne. 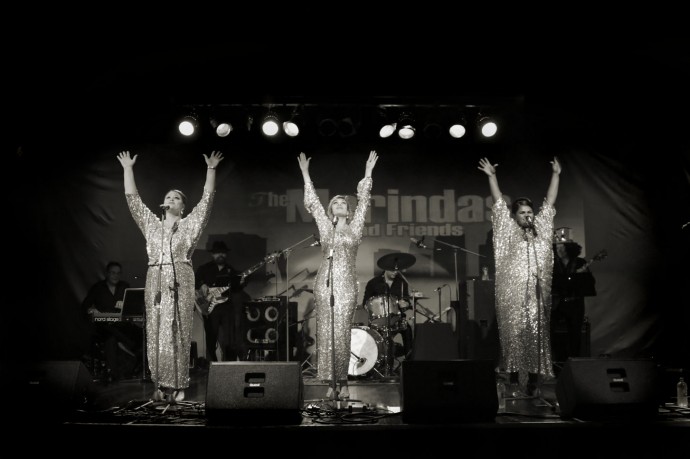 “It’s about getting our foot in the door in Sydney and Melbourne and getting more exposure. It’s more of a promotional tour so people can see who we are. Already a lot of people know who we are through the internet but it’s a good opportunity for people to come see us live,” says Candice.

They cover some of Motown’s greatest hits including Ain’t No Mountain High Enough, Baby Love, Please Mr Postman, My Guy, I Want You Back, and Heatwave but are no strangers to writing their own songs, one of which they’ll be performing at their upcoming shows.

“We had a group of industry contacts and in our critic’s team and we had them vote on five of our demo songs. Most of them chose ‘Ready to Love’. They said, ‘Na, release this one first. This is a great song’,” she says.

The Merindas plan on working on an album in 2015 and are touring Beijing in August. For more information on them or their shows visit their website, Facebook page, or email [email protected].