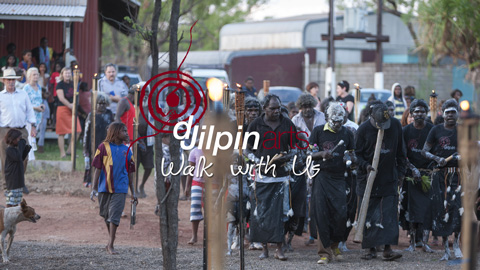 Djilpin Arts located in the remote Beswick (Wugularr) community on the south-west border of Arnhem Land, will bring a rich and ancient tapestry of Indigenous culture to Federation Square in Melbourne on 22 and 23 May.

The festival begins with the Morning Star Pole Ceremony at 5pm on Thursday 22 May at the Victorian College of Arts, followed by a procession to Federation Square.

The Morning Star Pole has been created on site with visiting Djilpin artists at the Victorian College of Arts and begins its ceremonial journey with the Djilpin Dancers in unison, singing and moving in accordance with the song and dance of their ancestors.

The procession will make its way down St Kilda Road to arrive at the No Vacancy Gallery in Federation Square where it is installed for the official opening of the Djilpin Arts Exhibition. It will remain on public display until Friday, then returned to the Victorian College of Arts and presented to the Wilin Centre for safe keeping and future display.

At 6pm, following the arrival of the Morning Star Pole, Deborah Cheetham, Yorta Yorta Soprano, composer and educator, will open the Djilpin Arts exhibition, Walk With Us, at the No Vacancy Gallery in Federation Square.

This magnificent exhibition includes enduring and highly collectable print surveys and new works in fibre, which are offered for sale for the first time.

Seventeen original framed etching plates and wood blocks of select works from the Gapu Series are also on display, along with unframed limited edition prints and all are available for purchase.

New Works in Fibre is the first solo exhibition from innovative fibre artist Dorothy Bienuwanga who experiments with technique and form to create spectacular large and exquisitely precise small pieces, with consummate skill and versatility.

Dorothy was a contributing artist in Museum Victoria’s “Twined Together” project in 2003 and the recipient of the 2007 Barunga Festival Art Prize.

She is a tradition carrier who divides her time between Oenpelli, Katherine and Maningrida, remote areas intimately networked in traditional indigenous culture. Dorothy remains passionate about her practice and teaching her family the precious tradition of fibre art, as has been carried on for thousands of years.

Djilpin women weavers are internationally acknowledged for their dilly bags, baskets and fine fibre mats which are produced by harvesting the Top End’s Pandanus palm, drying the young shoots then dyeing with colours using indigenous plants and tree roots.

The three traditional weaving techniques include coiling for the baskets, twining to create conical baskets and contemporary sculptures and string from the Butt Butt tree, which is rolled on the thigh until it resembles twine. This is used in ceremony, string bags, binding objects, feather belts, head dresses and arm bands.

Gapu Print Survey & New Works in Fibre opens at 6pm on Thursday 22 May and can be viewed from Tuesday 20 May to Sunday 1 June.

Kundirri, The Life & Legacy of David Blanasi film premiere, will be held on Friday 23 May from

8pm-8.45pm Deakin Edge Amphitheatre, Federation Square. There is limited seating and bookings can be made via email: [email protected]

Missing since September 2001 and filmed a decade on, Kundirri reveals the exceptional story of David Blanasi’s life, country and culture through the breathtaking art of the Blanasi Collection housed at Beswick’s Ghunmarn Culture Centre, archival footage and the songs and stories shared by family and community members.

The Aboriginal elder, celebrated painter, international performer, didjeridu master and custodian of centuries of ancestral law, left an incredible legacy and an unsolved mystery, which has ignited superstition surrounding his disappearance.

Actor, singer and songwriter, Tom E. Lewis, follows a traditional performance from the Djilpin Dancers and Song men, with a showcase of contemporary music from his latest and much applauded album, Beneath The Sun.

Tom is also the Artistic Director of the Walking With Spirits Festival held annually at Beswick Falls (Malkgulumbu), where community members from all over Arnhem Land meet to re-enact the ancient art of corroboree with fire, music and imagery.

Tom is your guide through these very special concert events which have travelled from the bush to the city, in celebration of Djilpin Arts’ commitment to community.

The concert will be held on Friday 23 May, 9pm-11pm at the Deakin Edge Amphitheatre, Federation Square. There is limited seating and bookings can be made via [email protected]