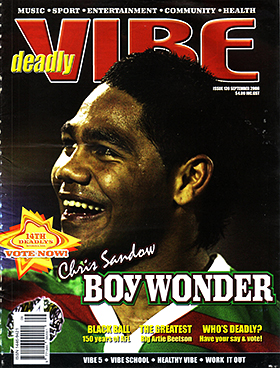 In 2008, South Sydney pulled a rabbit out of the hat in the form of precocious young half-back Chris Sandow. Chris’s electric play energised the Bunnies to a mid-season revival and paved the way to Dally M Rookie of the Year honours. Deadly Vibe catches up with Chris to chat about the amazing ride that was his 2008 season.

Three hour’s drive north west of Brisbane, at the banks of the Barambah River, lies the Aboriginal community of Cherbourg.

Originally established in 1904 as a mission settlement, Cherbourg became the home of at least 38 different Aboriginal language groups from all over Queensland, who were moved there as recently as the 1970s under the Aboriginal “protection” act.

One of the largest and oldest Indigenous communities in Queensland, much negative press been written about Cherbourg. But this same community has also long been the home of many of Indigenous Australia’s most inspiring role models.

Adding his name to that impressive list in 2008 has been the South Sydney Rabbitohs 19-year-old half-back and Cherbourg’s new favourite son, Chris Sandow.

After beginning the year in relative anonymity, playing for Souths’ under 20s side, Chris was handed a call-up to the Rabbitohs’ NRL team after the side had sustained the loss of its star half back Craig Wing and slumped to 11 losses from 12 matches.

Showing none of the nerves of a first year player, Chris’s promotion to the Rabbitohs line-up sparked a remarkable five game-winning streak.

In his first NRL game against the Warriors – the NRL’s largest and most intimidating pack – Chris not only proved his NRL calibre; he kicked the game-winning field goal in the dying seconds of the match!

A week after the Warriors match he scored his first NRL try, and a week later kicked yet another game-winning field goal in what became the second biggest comeback victory in NRL history. As the Rabbitohs transformed overnight from easy beats to comeback kings – all catalysed by their new young half-back – a star was born.

“When I came down to Sydney, I wasn’t even thinking that I would end up playing first grade this year,” Chris admits. “But South’s gave me a chance and I grabbed it by two hands and didn’t let go.”

Chris was often dubbed the “Aboriginal Alfie” throughout his schoolboy career, and like Alfie Langer, Chris is usually the smallest player on the field. But while admitting the size of players in the NRL is one of his biggest challenges, it hasn’t dinted Chris’s seemingly endless confidence one bit.

“There’re plenty of big blokes in the NRL,” he says. “It’s a really physical, really strong game, and I like the challenge of taking on the bigger guys when they run at you.”

After making his debut, Chris quickly proved that, despite his size, he had no hesitation in putting his body on the line and hurtling himself at opposition props and second rowers.

“I grew up playing that way back in Cherbourg,” he says. “I think it probably just comes from being an Aboriginal kid from Cherbourg.”

While he may now be establishing a promising football career in Sydney, Chris is still very much a Cherbourg boy at heart, and when he attended this year’s Dally M Awards – at which he was named the 2008 Rookie of the Year – he took his mother Rhonda as his date.

“If it wasn’t for my mum, I would never have played first grade,” Chris says. “That’s why it was important for her to be there. My mum is a big part of my life.

“She had a great night, but was a little speechless. When the journos were asking her stuff she just couldn’t talk!”

Another key to Chris’s success today is his attitude towards playing and training – an attitude that has a lot to do with the birth of his first son.

“My son has had a big impact on my life,” Chris says. “I want to make things better for him.

“I think if it wasn’t for my little boy I probably wouldn’t be playing first grade right now. I’d probably be back in Cherbourg.”

Chris’s girlfriend and son will be joining him in Sydney early next year, and the young star is also planning to buy a house in Sydney where he can billet and help other young men from Cherbourg who hold ambitions of making it in the NRL.

“I do get homesick, but I’m here to play footy and I want to make my life in footy first,” Chris says practically. “Home isn’t going to run away, and in the meantime, when I get some time off I usually head back there to see everyone.”

Having also been awarded the inaugural George Green Medal as the NRL’s most promising new Indigenous player in 2008, Chris has completed a dream start to his NRL career by being selected in the Indigenous team to play New Zealand Maori in a curtain raiser game at the Rugby League World Cup opening ceremony in October. He also made the Toyota Cup Team of the Year has been nominated for a Deadly Award.

After bursting onto the rugby league landscape a virtual unknown, this young footballer from Cherbourg has finished the year being acknowledged as the NRL’s top young prospect. It is often said that confidence is key, and in Chris Sandow’s case, truer words could not be spoken.