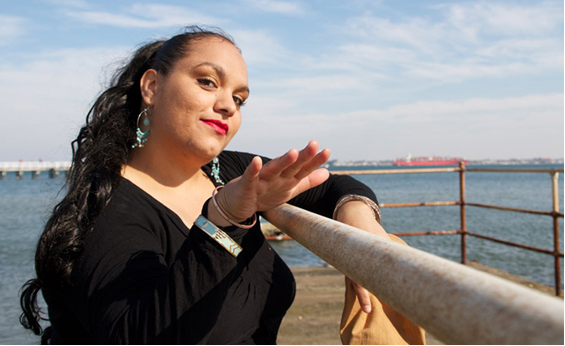 What began as poetry, listening to family sing around the fire and absorbing life’s experiences as a young girl has resulted in dazzling displays of hip hop and soul, followed by albums, live shows and awards for Crystal Mercy, aka Lady Lash.

“I penned those tracks over a few years and I’m happy that I finally got it all together because I was filled with a lot of stories and where I’ve been and what I’ve seen,” says Crystal.

“I wanted the album to be about finding your own sound, it’s pretty hard to define but I wanted to keep it very soul and explore a lot of vocal talents that I have.”

Crystal moved from her small childhood town to Melbourne in 2005 to pursue a career in music. She drew inspiration from her own life experiences when writing her album and engaged in a different, but effective, writing process.

“Every single song that I wrote was under the moonlight, it was always at night. I woke up some nights after dreams and just started writing, so there were a lot of stories that came from dreams and life experiences,” she says.

“I think it’s more comforting to write a song at night. For me, my mind opens more at night and the early hours of morning.”

Crystal was recently nominated for the Best Indigenous Act for the Age Music Victoria Genre Awards among artists like Archie Roach, Dan Sultan, Kutcha Edwards and Yung Warriors. To her surprise, she won.

“I was so humbled to even be nominated. I went there and to be called out on stage I was really shocked because I was not expecting it at all. It was amazing, it was such a humbling feeling to be honoured and be acknowledged for my work,” she says.

She has plans of touring her album, but must do more promotion first; it’s also made more difficult being a single mother.

“At the moment I feel that obviously there are sacrifices that need to be made. You’ve got to have a balance in your life to make it happen and you need people around you to support and help you,” she says.

Although she has made the transition from hip hop to soul – genres that are worlds apart – Crystal isn’t “tossing out” the Lady Lash persona quite yet. In fact, there’s a new Lady Lash hip hop inspired album already in the works.

Even though Lady Lash is still lurking around, Crystal feels that her new pseudonym allows her to be taken more seriously as an artist. She says that everyone was surprised when she made the dramatic transition.

“I needed something new and fresh to do. I’ve always wanted to sing and it was my chance to branch out and do it,” says Crystal.

“I think it has really made people stand up and go, ‘Wow, she’s an artist.’”

Ultimately, Crystal Mercy/Lady Lash hopes that her music can help people strive for what they want out of life and she wants people overseas to hear the message too.

“The message is definitely to follow your dreams and be positive and move forward in life because there’s always a story to tell. If you believe yourself, you’re going to do what you do and keep moving forward,” she says.