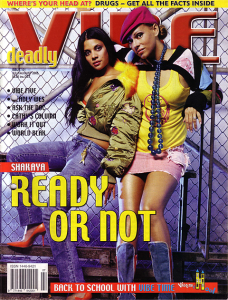 Are you ready for Shakaya? ‘Cause these sistas are back with a brand new album.

When you meet the girls from Shakaya, it’s really quite impossible not to get swept up in their effervescence. When they enter theroom, it’s as though they’ve brought a whole entourage of good vibes with them, and everything seems that little bit brighter.

Literally oozing positive energy, Naomi Wenitong (22) and Simone Stacey (27) seem genuinely delighted to talk to you, interspersing their cheery dialogue with regular shouts of laughter. It’s certainly infectious, and it would be hard to imagine anyone managing to stay in a bad mood for very long if they spent any time with these cheery songbirds.

“We’re always looking for something to joke about,” says Simone, nudging Naomi.

“It can make it difficult, actually,” Naomi admits, giggling. “When you have to act all sultry-looking in a film clip, and you keep bursting out laughing.”

They certainly look sultry in their latest film clip, for their new single Are You Ready? It’s a high-energy RnB party anthem with a killer hook and a beat that you can’t help but move to. In the video, Naomi and Simone can be seen cruising on Sydney Harbour before driving a flash black car to a jumping wharf party. They’re slick, sexy and very, very cool.

“The whole thing took 18 hours to make,” Simone says of the video. “We spent four hours out on the harbour, and I can tell you, it was a lot rougher than it looked!”

“I have to drive a car in the video,” Naomi adds with a chuckle. “But the thing is I can’t drive! So when they had to take a shot of us driving past the camera they had to get a stand-in who was wearing a wig to drive the car.”

Simone sings the lead vocals in the new single, but the album is definitely a collaborative effort.

“One of the songs I sing on the new album is called Candy Rain. It’s an old 80s RnB number that we reworked. It’ll be great for DJs!”

As well as some upbeat tracks, the girls also deal with more serious issues. Simone’s favourite song on the album is called Broken, and deals with the issues oflow self-esteem and substance abuse.

“Everyone has faced problems at some time in their life,” Simone explains. “Everyone has been broken. This song is about how you don’t need to deal with things by yourself – that you’re not alone.”

Another song that both the girls name as a favourite is called No Shame.

“This one’s strictly for the girls,” Naomi says, flashing her luminous smile. “It’s all about believing in yourself and not letting negative people hold you back.”

“I think that it’s especially important for our culture,” Simone says. “The word shame really holds our mob back, so this song is saying: get out there and do what you want, there’s no need to feel shame.”

The new songs reveal a more mature Shakaya, and herald a more definite move in an RnB direction and a truly individual style.

“We’ve been out of the scene for a while,” says Simone, “but we used that time to really get the next album right. We basically eat, breathe and sleep music these days!”

“We just want to keep getting better and better,” Naomi adds. “We wanted to come out of that studio feeling happy with what we’d done – to prove to ourselves and to others that we can really do it.”

They’ve certainly achieved that. The new single and forthcoming album firmly place Shakaya as the leading RnB act in Australia.

“There is so much talent out there now,” Naomi adds, “and we really support it. It’s not about competition, it’s about giving all these talented artists the recognition they deserve.”

Shakaya’s new album is set for release in August. Are you ready for it?