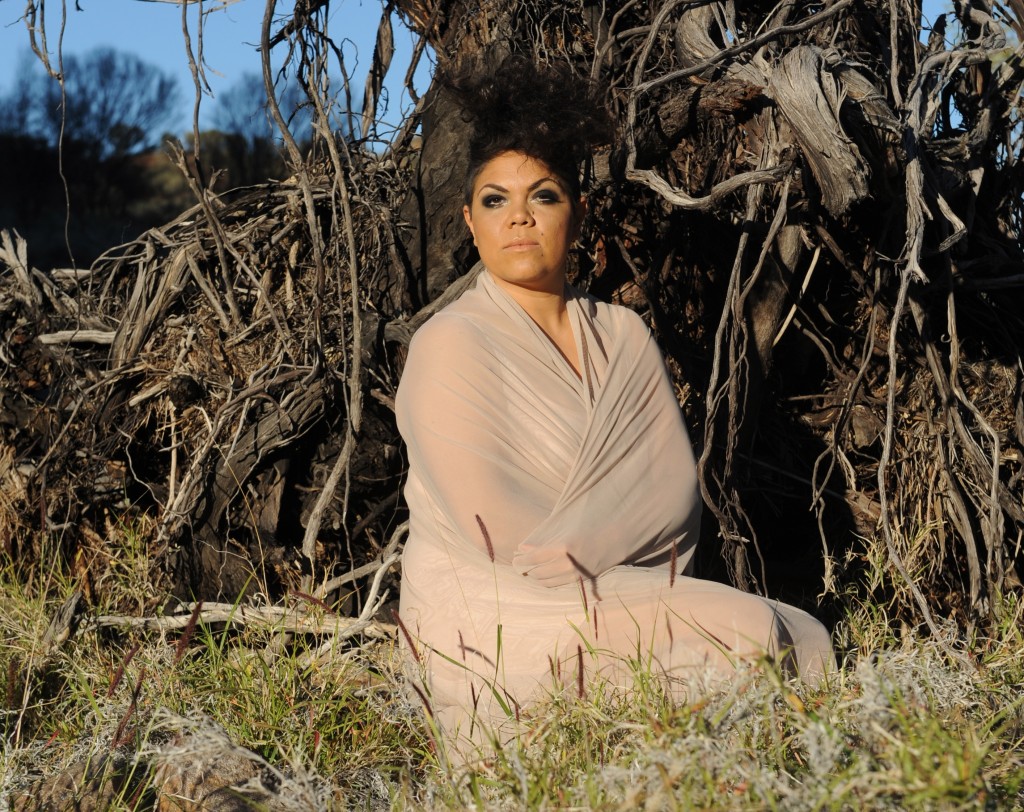 Hit the play button on Jacinta Price’s debut album and the sounds of blues, gospel, folk and country will filter through. Dry River is a testament to the mix of culture, place and identity for this Warlpiri woman from Central Australia who’s already well-known for her soulful voice, acting and as a TV host.

But it’s the naturalness of Dry River that provides its distinct sound, reflecting the songwriting and recording process undertaken for the album. The songs are inspired by Jacinta’s life stories and her central desert country, and the recording was an organic process over two weeks on the Central Coast of NSW with producer Bill Chambers and Jacinta’s partner, Scottish soul-man Colin Lillie.

Add to the mix her Aboriginal/Celtic heritage and the album delivers across multiple themes and music genres.

“There is a whole range on the album and I’ve definitely been inspired by a gospel sound. I grew up walking around dry river beds; my country is a very spiritual place for me. People go to church, I go bush. There is a revival, baptism type of influence but our river beds are dry most of the time,” Jacinta says.

“I also love storytelling and the songs on the album have been created over 17 years. There’s a mix of new and old and I was lucky enough to work with legendary artist Bill Chambers to bring these songs to life.”

The inspirations for the tracks are Jacinta’s stories inspired by friends, family, triumphs and heartaches. And the recording used minimal instrumentals, to give a natural sound to the album. Spending two weeks with Bill and Colin, Jacinta says the recording of the album was an inspiration in itself, a creative process between the trio which allowed the best of her music to rise to the surface.

“We spent two weeks on the Central Coast and slept in the studio. We were totally removed from everything and there were laughter and tears every day. It was amazing. I’d get up in the morning and say ‘wow yesterday was amazing’ but then we’d experience a new and incredible day again,” she says.

“I was able to feel my way through things and when it felt right we recorded that. Collaborating with Bill was a wonderful, fluid process and we used artistry to make it all happen. The songs were recorded live and that’s why you get that old school feeling when you listen to the album. You’re in a room with instruments and vocals, nothing else and that’s the experience you get when you go and see someone perform live.

“I’m not one of those people who play it back and record again multiple times. I like to capture that moment in the first couple of takes and if they are imperfect then that’s ok because that’s what life’s like. Music nowadays often lacks the human elements.”

For Jacinta, one of her favourite tracks is Release Me which her partner Colin produced. “I really love that one.”

But aside from the softer elements that she brings to her album, Jacinta also refers to ‘grittiness’ and ‘angst’ that also comes through Dry River.

“I wanted people to go on a journey and to feel Central Australia as well. In many ways the album is an ode to Central Australia and picks up the influences of my whitefella father and blackfella mother. I wanted for people to connect to the songs, relate to them, and take something away from them.”

To support the album release on 21 November, Jacinta is planning a tour to share her music with ‘as much of Australia as I can’. Tour dates will be released soon, she says.

Of course she is well-known as the host of Yamba Playtime in Australia, the hit children’s show which began on Imparja and is now seen on the Channel 9’s GO station. But singing and songwriting are her main focus.

“I’m a good juggler,” she says, “and I can still be Yamba’s friend as well as put a focus on my music.”

Creating music has been a lifelong passion and her biggest inspiration has been her grandmother.

“I have these songs bubbling away in me and there’s the desire to get them out and share them. A lot of them have been created by my experiences and that of my family’s. My grandmother, for example, saw many changes in her lifetime. She lost eight out of her 11 children before we lost her and all through that she maintained her dignity and her strength. She never complained and I draw a lot of my strength and inspiration from her,” Jacinta says.

“As human beings, she showed me that we are strong and can overcome adversity.”

Family is all important and her own children also inspire Jacinta to succeed.

“I became a mum at 17 years of age and I have four boys that encourage me to follow my dreams. They have been a big support for me and they understand who I am. I’d like to thank them, and the album is dedicated to them.”