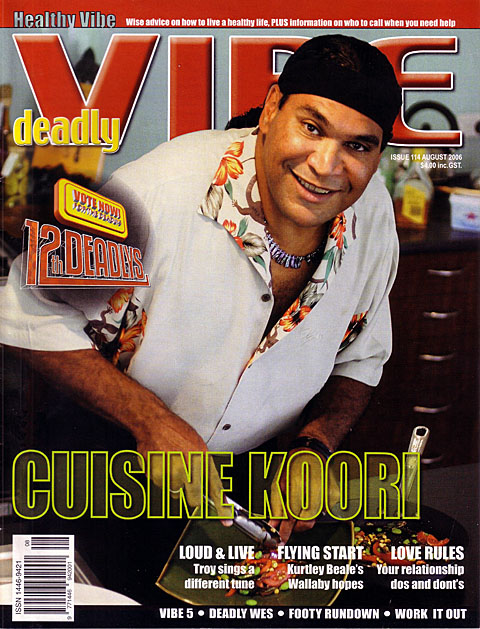 Mark Olive on the cover of Deadly Vibe Magazine – August 2006

Got a hankering for some bush tucker? A new food and travel show hosted by Aboriginal chef Mark Olive on the Lifestyle Channel, The Outback Café, is serving up traditional Aboriginal cuisine – 2006 style.

Mark, also known as The Black Olive, has been a chef for more than 20 years. Many of you may know him from his cooking show on the ABC’s Message Stick, or his enticing recipes on the program’s site.

Born in Wollongong, NSW, Mark first became interested in cooking when he was just a child, watching his aunts in the kitchen. When he grew older he trained with a European chef and has worked in a variety of places, from a la carte restaurants to Jewish kitchens. He also caters for corporate functions.

“About 12 years ago I got bored with cooking so I got involved in community television,” Mark says. “From there I studied at AFTRS (the Australian, Film, Television and Radio School), worked as a runner and an extra on film and TV productions, produced documentaries and studied acting and filmmaking.

“It’s been a long journey of study and hard work, but I’ve finally made it.”

Mark’s combined passion for food and film make for the perfect cooking show. But The Outback Café is so much more than that.

“It’s a mix of food, travel and Indigenous culture, history and stories of the Dreaming,” Mark says. “We visit some really diverse Aboriginal communities – it’s an opportunity to show the rest of Australia how varied Aboriginal Australia really is – we’re not all just standing around on one leg outside a humpy in the desert, holding a spear.”

Making the program’s first series took six months, as Mark and his crew wanted to make sure that they captured the real essence of each community they visited.

“We were invited into these communities by the Elders and spent days listening to them and learning from them,” Mark says. “It makes a big difference to the quality of the program – the effort we put into it to portray these communities really come across.”

Mark’s travels take him everywhere from the coast of Western Australia to the Great Ocean Road in Victoria, and from Queensland’s tropical rainforests to the world heritage Kakadu National Park. It all adds up to a feast of flavours and scenery.

Speaking of fests, the list of recipes that Mark prepares for his shows is enough to tempt even the fussiest of eaters.

Rather than keeping it totally traditional, Mark combines the contemporary with the ancient, slowly introducing his audience to bush food. A fine example is his “roolet mignon.”

“It’s just like filet mignon,” Mark explains. “Except instead of regular steak I use roo steak, wrapped in emu prosciutto, served on a bed of Warrigal greens.”

“All the money goes back into the communities,” Mark says. “It’s giving the young people in these communities focus – it empowers them.’

It all adds up to one very appetising recipe, wouldn’t you agree?