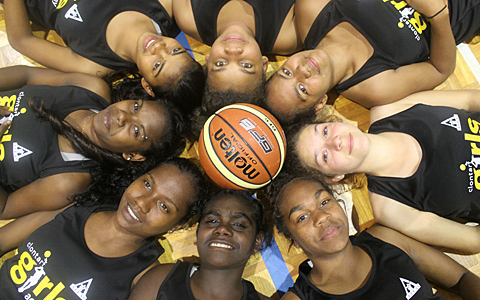 The Perth based Clontarf Girls Academy’s elite basketball squad are heading off this weekend to the International Friendship Games in Shanghai, China.

The 10-member squad are very excited about the tour and have been preparing this week with training, information sessions and practising their Chinese language skills. Deadly Vibe Wire caught up with Head Coach and Program Manager, Desiree Delcoure on the eve of their departure.

Desiree has been with the Academy for three years and is a former US College basketball player. She knows talent when she sees it, and says the Clontarf team has untapped potential, with players who are capable of playing in the US, and eventually going on to national and international basketball competitions.

The players range in age from 13 years through to 16 years and are based at the Clontarf Academy, with two players coming from Perth College.

“We’ve been training the girls and competing in local tournaments, and they’ve been doing quite well. I would equate them to playing at the State League level,” she says.

“The girls have also come together really well as a team and competing in the Friendship Games gives them the experience of international competition, and they get to experience another culture. They are also developing the confidence that goes with representing their country internationally.

“It’s also a lifetime experience that they can take back to their communities, or take it further. I believe our players could play US College basketball or go onto represent Australia in the Olympics.”

The girls have never travelled internationally before, and come from communities throughout WA and the NT.

The Clontarf Girls Academy is a boarding school which uses sport as the ‘hook’ to engage young Aboriginal and Torres Strait Islander people in education, aiming to increase school attendance and participation.

Desiree believes the Games will be competitive.

“We are playing our games at a special sports school in China – the Shanghai Sports School. These athletes are handpicked from an early age and I’ve no doubt our girls will work hard on the courts,” she says.

The opportunity to attend the Friendship Games came from Atlas Iron who sponsored the National Indigenous Basketball Tournament in Adelaide in 2011.

“We competed in that tournament and won the Under 18’s round, and we have been winning at other tournaments since then. Atlas is a sponsor of the Friendship Games and is sponsoring our entire trip. All the other teams competing at the Games have handpicked players from the State League here in WA, so it’s a huge honour for Atlas to be sponsoring our Clontarf team,” Desiree says.

“I am really proud of the commitment of the girls to the competition. They come from all over WA and NT and do get homesick, but they chose to stay back during these school holidays and train for the Games.

“I have no doubt in my mind that some of these players are our next Olympians. They already play against State League players and do incredibly well.”