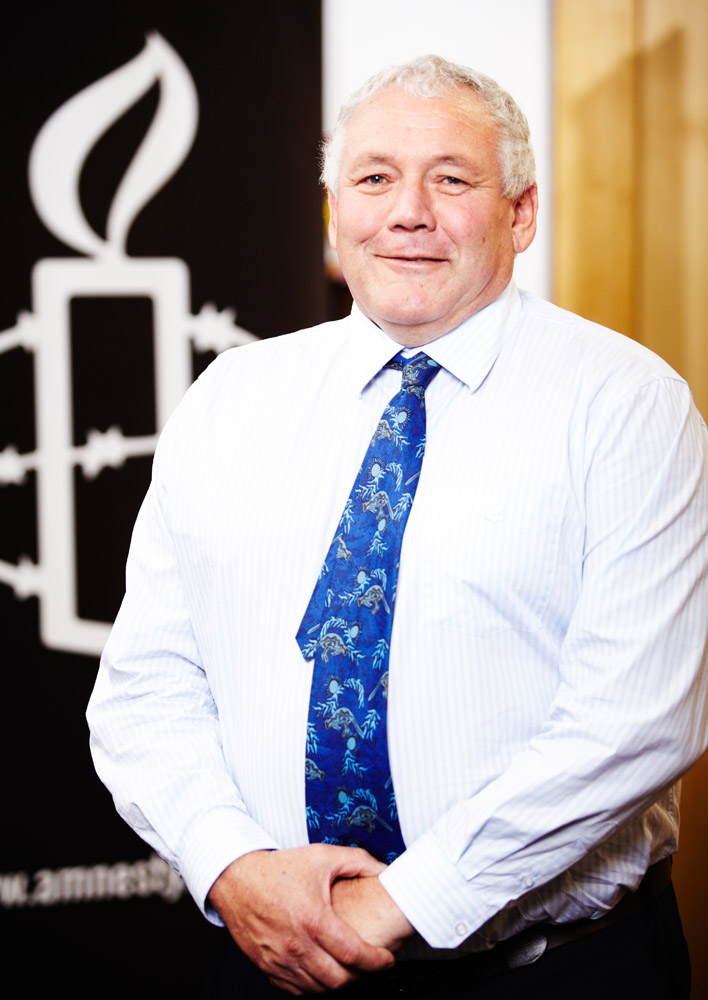 Amnesty International Australia’s Indigenous Rights Coordinator Rodney Dillon has been campaigning hard for the rights of his people all his life, and more recently for the rights of the Traditional Owners of the Utopia homelands in the Northern Territory.

Rodney is a Palawa Elder from Tasmania, a former ATSIC Commissioner (TAS), and the 2011 Tasmanian Australian of the Year. He has been instrumental in the repatriation of Indigenous remains from overseas, including changes to British repatriation policies.

He has been involved in Aboriginal fishing rights at state and national levels, and chaired a World Indigenous Fishing Conference in Vancouver. He also pushed for the continuing presence of the Tent Embassy in Canberra.

Among his other achievements has been as a founding member of the South East Tasmanian Aboriginal Centre and current Chair of the newly formed Weetapoona Aboriginal Corporation. He regularly visits Indigenous inmates, especially those who do not have regular visitors or who are ill in hospital. He cites his favourite achievement as the purchase of a sheep station on Bruny Island for Tasmania’s Aboriginal people.

His social justice conscience began early in his life. “The first day I got on a bus and the kids told me to go away. You see the injustice for yourself and how it impacts on others. I had enough of racism. Kids will be kids but they are taught racism at home. In Tasmania we had no rights for our culture and I became an advocate for change.”

He is acutely aware of the difference connection to culture makes for young people, and sees isolation from culture as contributing to the rates of young Indigenous people within jails today.

“There’s got to be a u-turn when kids are young,” he says.

Amnesty International Australia has been working hard on its NT homelands’ campaign.

“People are paying money to live in a tent, being charged rent, and they are on their own lands. They have the right to live on their homelands and we have been negotiating with the Utopia communities to see their rights are heard. Amnesty is empowering the community members to go to Canberra and tell the politicians what is wrong with the Northern Territory intervention,” he says.

“We are generating a lot of goodwill in our negotiations and are being directed by the people we are working with, on who needs to go down [to Canberra] and tell their stories. We have had a lot of success with this campaign. The truth of what is happening is getting out, and there is empowerment for the people – their voice is being heard.”

His heart is always in his campaigns and Amnesty International Australia is getting ready to advocate on the high rate of young Aboriginal and Torres Strait Islander people in Australia’s jails.

“We need better education and better understanding of their cultural needs. There are better ways to work with our young people than locking them up. When you are 10 years of age and you’ve had 20 contacts with the police by then, then you know something has to be done to prevent incarceration,” he says.

“We know things work when programs are run by the community. There is a rehabilitation program for our young people at Mt Theo that is working very well,” he says.

“We need the Commonwealth Government to come out and say the high rates of incarceration for our young people needs to come down and we need bi-partisan support to bring these rates down.”

Given his passion for Indigenous rights and advocacy, Rodney intends to keep campaigning into the future.

“This is what I do and I don’t see myself changing.”