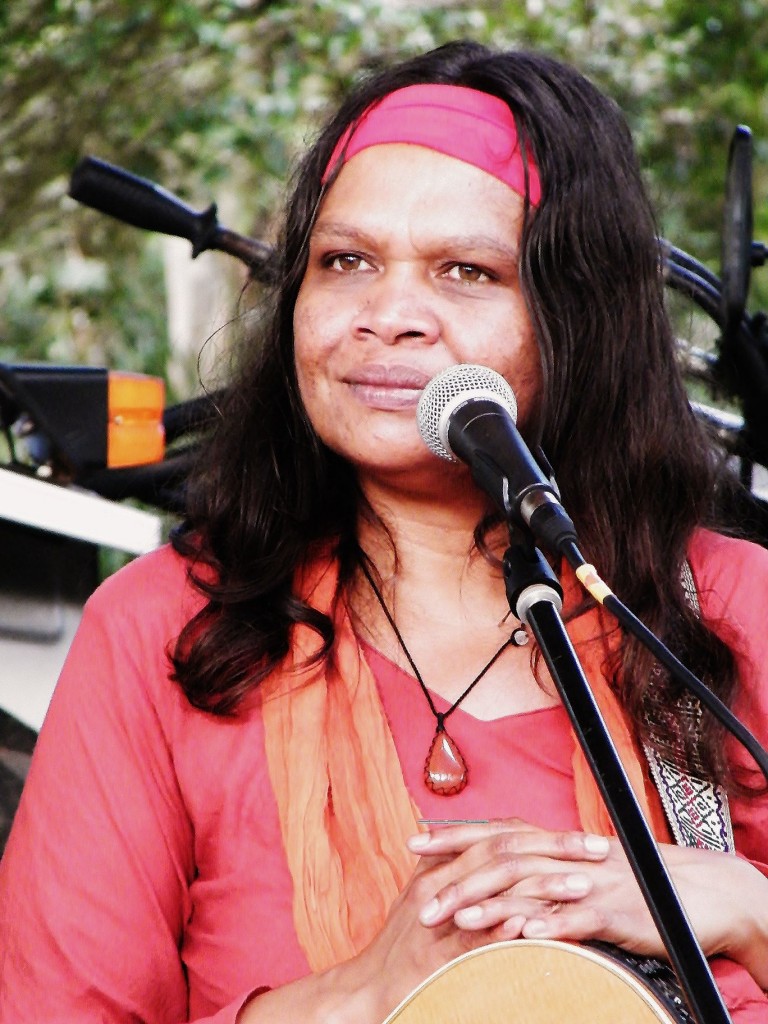 Kerrianne Cox, a humble multi-award winning performer, philanthropist and human rights activist, has spent a large part of her life travelling and inspiring people all over the world with her music and passion for the wellbeing of mankind.

As a shy girl from the remote former mission of Beagle Bay, north of Broome, Kerrianne became a well-known performer when she left her community to explore the outside world.

“I spent a bit of time with the church, but I left that world and I started to kind of expand out. As I limped into my spirituality, I connected with ancient culture and that was really important for me,” she says.

Performing has always been an important part of her culture, with knowledge being passed down the generations through song and dance. Each of her albums has songs to reflect different phases in her life as well as the Aboriginal culture and her community.

“I’m just keeping an old legacy strong and knowing that I’m a part of something that’s been going since people before me,” she says.

“It’s not just about music for me. I’m there for my people.”

In Australia, Kerrianne has performed at iconic venues and historical events; some include the Sorry Day concert at Sydney Opera House, the Sydney Survival Concert, opening Perth Artrage, Corroborree 2000 and was a featured artist at the foot of the Harbour Bridge during the Reconciliation Bridge Walk in 2000.

As well as building a strong singing career, Kerrianne is a powerful activist for her people. She has spent several years leading a lobbying group against a planned liquefied natural gas plant at James Prices Point in the North West Kimberly area.

“Beagle Bay means everything to me. Everything I am doing with the government is for the people, by the people, about the people and with the people. Every day is a great challenge,” she said.

Protecting the area and conserving the environment for future generations is very important to Kerrianne, and her song “Mother Song” strongly expresses this.

“Stop raping the land; we can’t take what she can’t give no more. Motherland is here for us to love and take care of. Who are we to forget about her? We must make a stand, work with her to exist, and then we will have a place to live with her in harmony,” her powerful lyrics say.

She believes a small eco-sustainable community owned and controlled by the people offer the only way forward for her people and all communities across Australia.

Recently, Kerrianne also appeared in the media to express her disdain with the naming of National Sorry Day. She believes it should be changed to something reflective of the progress of the relationship between the Australian Government and the Aboriginal and Torres Strait Islander community since the apology.

While she has accepted the apology offered by Prime Minister Kevin Rudd, she would like to see more progress made between the people in terms of understanding the needs of her people and those living in other remote Aboriginal communities. She encourages young people within these communities to come forward and be leaders toward this.

“We need young leaders who can be strong to advocate for the people in their communities, especially in the non-English speaking mobs who haven’t really studied the ‘white man’s world’ or the ‘westerner world’,” she says.

Within her career, Kerrianne has travelled extensively through the US and Canada and had the pleasure of performing at the Kennedy Centre in Washington DC and the Lincoln Centre in New York.

She toured South Africa, playing at events hosted by the Australian High Commission of Cape Town and she was invited to perform in New Caledonia for two weeks at the Femme Funk Festival.

Kerrianne had several experiences overseas that changed her and confirmed her determination. It was during her time in South Africa that she discovered a new perspective on the world and compared her time there with spending time on the edge of Broome or the Kimberly.

“I had a very spiritual experience there meeting the people because they were very much like us,” she says.

“That place showed me that we do have a lot here, we just need to come together and pull together to resolve things that can be resolved.”

Kerrianne was awarded a Centenary Medal by the Australian Government for service to her country and upon returning to Beagle Bay post-travel, she was elected as chairperson of the community by her people. It was then that she began lobbying for change in the mistreatment of women, and the trend of abuse within the community. This work also earned her a nomination for the National Human Rights Community (Individual) Award.

Much of Kerrianne’s time has been spent campaigning for women’s rights and the negative impacts of the criminal justice system. She has performed at the International Sisters Inside conference and spoke of her personal healing journey and the trauma that the first people of Australia have suffered at the Free Mind’s Expo.

To find out more about Kerrianne, head to her website.