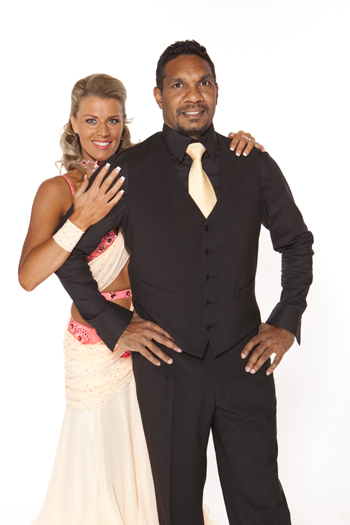 David Wirrpanda thought dancing would be easier than footy, but in his latest project, Dancing With The Stars, he’s pushing himself to the limit.

He’s best known for his role as a tough AFL competitor with the West Coast Eagles, but after putting on his dancing shoes for the Seven Network’ss Dancing With The Stars show, David Wirrpanda reckons dancers are more macho than you think.

“It’s really hard, I was actually surprised,” says David. “Initially I just thought I’d give it a go, have a bit of a laugh and do something different, but we’ve been dancing four hours a day and I’ve never trained four hours a day for anything, even for football. It’s gruelling when you do it every day, plus you are using different muscles and a different posture, so for the first two or three weeks I thought I’d got myself into big trouble. I’ve got bad legs and feet and when you’re dancing on floorboards that much it takes its toll. Also with footy you have full-time medical staff there to look after you, but with the dancing you’re on your own. In their own right, dancers are tougher than footballers. I have a big appreciation for what they do – I couldn’t do it.”

But dance he did, and all for a good cause to help raise money for something close to his heart: the David Wirrpanda Foundation, which has a range of programs to mentor Indigenous kids through primary, high school and employment programs. The programs are currently based in Western Australia, but David hopes he will soon be able to expand them into Victoria.

“The Foundation’s all about education and health, and one area that I’m particularly proud of is that we’ve got a program for women where we teach self-esteem. I’ve looked around Australia and there are a lot of sporting programs, but there’s nothing there that’s just focused on the girls.”

David says growing up with activists in his family made him determined to give something back from his football career.

“I grew up in a real political family and the biggest thing I want is to be able to give the same opportunities that people like my nan and my aunty gave to other people. That’s where all the passion and motivation comes from. I had a great career in football and there’s no need for me to sit back and enjoy it on my own. I want to make sure kids in communities get the same opportunities I did.”

Little did David know that politics would lead to him dancing up a storm on national television to help raise funds for his Foundation or that the voting lines would run so hot when he took to the stage.

“The only dancing I had ever done was at a wedding with all the aunties around. I’d never done anything like this before, so I didn’t know how I’d go,” says David.
But despite his lack of experience, at the time of writing, David Wirrpanda had already made it through four rounds of the competition. Still, he says he won’t be too disappointed if he doesn’t make it to the finals.

“Over here they’ve gone pretty hard with the voting in Western Australia, probably because I work on a radio station here. I was almost going to jump on television and say don’t vote for me, I’ve had enough,” he laughs. “I’ll be the happiest blackfella in the country if I get voted off.”

But it’s not just the punishing physical schedule that has David looking forward to life after dancing, it’s also his latest passion in life, his son Marley.

“It’s the best thing, regardless of all the other stuff I’ve done in my life. My biggest goal is to be the best dad that I can be and if all else fails it doesn’t bother me because I have him. This here is the best challenge and the best thing that’s ever happened. I hate it when he goes to sleep because I just can’t wait for him to wake up.”

What with being a dad and dancing up a storm, David says life has never been busier since he hung up his footy boots.

“Now’s the busiest I’ve ever been. I’m really committed in a lot of different areas. I’m a director with a couple of companies, which keeps me busy as well. I’ve also been hosting a radio show, as well as a show for Channel Seven in Western Australia, called The Extraordinary Taxi Ride. The telly show was a bit of a laugh because there was a taxi that drove throughout the state and you had all these different people that went into a competition to win part of the ride. It was really good fun.

“For a lot of the segments we went to really remote places that not many people know about. I’d never had the opportunity to go to places like Shark Bay up north. I’ve got a lot of friends and family there, so I had a great time and got to do some really good fishing and meet some great people.”

While his work in the media seems to have its upsides, his Dancing With The Stars appearance is a real challenge.

“I should have kept playing footy – it’s a lot easier,” he laughs.